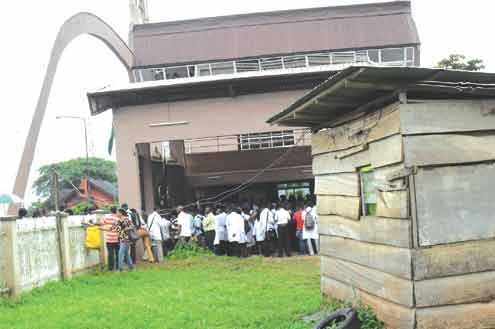 Protesting University of Benin Medical students this morning shut the gate of the institution and blocked the Benin-Lagos Expressway causing traffic gridlock.

It was alleged that other universities whose medical schools are not accredited are sending their final year students to the University of Benin, thereby increasing the number of students beyond the approved limit.

The implication of this is that students who should have graduated this year will not be able to sit for their final year examination as a result of the withdrawal of accreditation.

Thus the students mobilised and blocked the main entrance to the institution.

Some of the aggrieved students who reacted said the institution did not come up with any information about their fate.

Efforts to speak with the institutionâ€™s Public Relations Officer, Mr. Obarentin E.A., proved abortive as his phone was switched off.

The Divisional Police Officer of the Ugbowo Police Division in the state, Mr. Sokoya Abiodun, said he had deployed his men to control the situation.