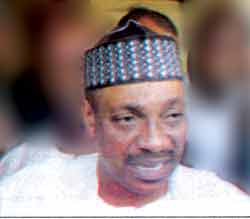 Jhalil Tafawa Balewa, the man who claimed to be the son of Nigeriaâ€™s first Prime Minister, Tafawa Balewa, has been exposed as not only a name dropper but also from Yoruba.

The real name of the man, who was campaigning for President Goodluck Jonathan for theÂ  2011 presidential election, is Jelili and not Jhalil that he claims to bear.

P.M.NEWS gathered from reliable sources this morning that the man comes from Ibadan, the Oyo State capital in South-West Nigeria.

Sources said he has been using the revered Tafawa Balewa name to con people in the last ten years; using the name to penetrate into the corridors of power where he rubs shoulders with the high and mighty.

Jelili, according to our sources, exploited his closeness to the wife of President Jonathan, Patience, to curry favour in Aso Rock.

There is suspicion that he might have arranged his kidnap to draw attention to himself,Â  considering his track record as a con artist. But the kidnap incident has backfired.

Three years ago, the Balewa family disowned him publicly but he persisted in his name dropping until the recent kidnap episode.The Balewa family has again distanced itself from the man.

â€œHe is not one of us,â€ Saddik Abubakar Tafawa Balewa told the BBC, after the operation to rescue Jhalil.

â€œI am sorry to hear of anyone being kidnapped, but the time has come to be clear.â€

He said he spoke on behalf of the family: â€œHe is not a member of our family, either by blood or by marriage.â€

He described how the Balewas had met the man several times, trying to establish his identity.

â€œWe first heard of a person from America, going around the corridors of power, claiming to be a grandson. After that, he said he was a son,â€ he remembers.

The family say they repeatedly asked for evidence, including DNA evidence, but none has been forthcoming.

In 2008, the extended Balewa clan took out newspaper advertisements distancing themselves from Jhalil Tafawa Balewa.

He leads â€œGoodluck na Kowaâ€, meaning Goodluck For All in Hausa, the language of the countryâ€™s north.