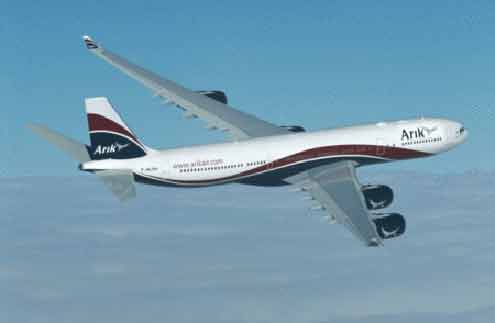 However, after threatening to move its operations out of Nigeria at a press briefing yesterdayÂ  and boasting that it will not pay any charges as the matter is pending in court, the managementÂ  of Arik Air last night kowtowed and paid N50 million to NAMA to resume flight operations today.
â€œAround 10 p.m. yesterday, they came to pay N50 million. They can resume operations thisÂ  morning,â€ Mr. Supo Atobatele, NAMAâ€™s Head of Public Affairs, told our correspondent onÂ  telephone early today.

Atobatele added that no airline should be above the law and wondered why Arik Air was the onlyÂ  airline that refused to pay when ten others had complied with the agencyâ€™s demands and haveÂ  been flying undisturbed.

â€œThis is the first time since 2003 that such an operation took place. Several ministers hadÂ  come and gone, but we thank the current minister of Aviation,â€ he said.

Some of the airlines that had complied with the agencyâ€™s demands include: Air Nigeria, DanaÂ  Air, Aero Contractors, Chanchangi, IRS, Bristow and Associated Airlines.

With at least 100 passengers on 120 daily domestic flights paying a minimum of N15, 000 on eachÂ  route, financial experts believe that Arik Air has lost not less than N180 million in additionÂ  to parking and catering services charges.

Asked by journalists yesterday at Arik Headquarters in Ikeja, Lagos, South West Nigeria,Â  whether he could repeat categorically that Arik Air will not fly again in the country if NAMAÂ  insists in collecting its money, Mr. Chris Ndulue, the airlineâ€™s deputy vice-president said: â€œIÂ  thought I was talking categorically. Everything I said before, I said it categorically.â€

Yesterday for example, passengers on Arik Airâ€™s international flights were delayed for long andÂ  were only allowed to take off after the airline scurried to NAMA and paid.

Arik Air has argued that the matter, which is at the Supreme Court, must be determined by theÂ  court before NAMA, goes ahead to implement any demand.

â€œArik Air was prepared to operate its normal schedule today (yesterday) but was refusedÂ  clearance to fly by NAMA causing untold hardship to hundreds of travelling guests across theÂ  country.

â€œThe dispute in respect of domestic charges has been on since 2002 and is currently before theÂ  Supreme Court; Arik Air does not wish to take any action that might prejudice the outcome ofÂ  the dispute,â€ Ndulue told journalists in a prepared statement.

Early last year, when the Federal Government compelled domestic airlines that were operatingÂ  international flights from the Murtala Muhammed International Airport (MMIA) to relocate to theÂ  Murtala Muhammed Airport 2, Arik Air was the only airline that failed to comply as it relocatedÂ  its operations to the General Aviation Terminal (GAT).

Meanwhile, yesterday, other airlines increased their flight frequencies as passengers besiegedÂ  MMA2 to fly. The terminal was filled to capacity as passengers abandoned GAT for MMA2.