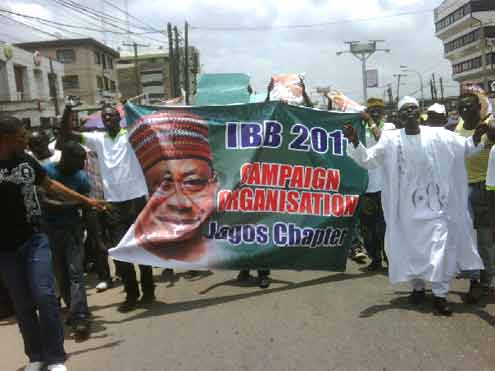 Supporters of former military president, Gen. Ibrahim Badamasi Babangida (rtd), in LagosÂ  yesterday flagged off campaign in the state saying that President Goodluck Jonathan is a goodÂ  man but lacks a structure within the Peopleâ€™s Democratic Party (PDP) to win the partyâ€™sÂ  primaries.

The supporters, in their hundreds, marched along the Opebi-Allen Axis of Ikeja brandishingÂ  IBBâ€™s posters and singing songs of victory.

â€œWe are here to show that IBB has grassroots support in Lagos. That is why you saw peopleÂ  coming out in their thousands to show their support for him. We believe so much in IBB, becauseÂ  since he left no other leader has been able to match what he did as President,â€ Prince EbunolaÂ  Martins, coordinator of IBB Campaign Organisation in Lagos, told journalists at a pressÂ  briefing after the march.

Ebunola told journalists that IBB remains the most popular candidate within the PDP and scaresÂ  other candidates to the extent that others are trying to stop him, adding that they will fail.

â€œEverywhere we have gone, IBB has remained the favourite candidate and if he were not, theyÂ  will not be scared of him.

â€œIBB is the man to beat. President Jonathan is a good man but he does not have a structure thatÂ  can put him there. To be President, you canâ€™t just wake up and win. There has to be aÂ  structure. That structure, IBB has it. That is why he was able to bring Obasanjo out of prisonÂ  and instal him as President,â€ he said.

As Ebunola spoke about IBBâ€™s popularity in the state, other supporters nodded their heads inÂ  agreement and sometimes, clapped.

Ebunola said that when former President Olusegun Obasanjo picked Jonathan as the running mateÂ  ofÂ  the late President Yarâ€™Adua, he had no support in the South West.

He said that with the construction of the third Mainland Bridge during IBBâ€™s administration,Â  traffic gridlocks have greatly reduced in the state.

â€œThere is no local government in Nigeria that IBB did not empower. In Lagos, it was during IBBÂ  that the local governments went from eight to 20. Women were empowered and villages were forÂ  the first time connected to electricity. During IBB’s time, money was able to flow not onlyÂ  within the rich but also to the poor and that is why we are supporting him, that is whyÂ  Nigerians want him to come back,â€ he said.