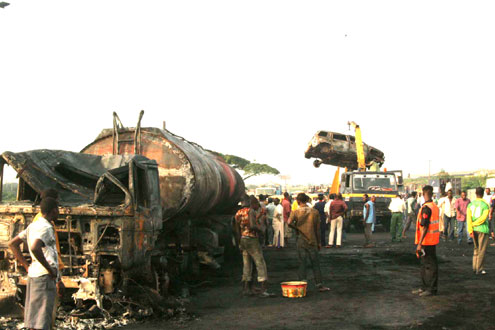 One ofÂ  them, Akin Alabi, who is the Ogun State correspondent of Global Excellence, a softÂ  sell magazine, said, â€œthe accident was terrible and was more horrible than the one thatÂ  occurred some weeks ago at Berger Bus stop in Lagos State.â€

â€œThe most painful thing was that all efforts to contact some officials of Ogun StateÂ  Government including the state governor proved abortive. The state fire service wasÂ  helpless. Fire men managed to work for about 15 minutes before they declared there was noÂ  more water. There was nothing they could do. ItÂ  was disheartening, â€ he said.

Alabi, who was one of the occupants of the Abeokuta-bound vehicles that were coming fromÂ  Lagos, lamented that the accident was caused by the tanker drivers who parked the trucks onÂ  the both sides of the road thereby blocking other motorists plying the route.

He said that the accident could have been averted if the state government had evicted theÂ  tanker drivers from the place.

â€œIf the state government had done what it is supposed to have done, probably, the accidentÂ  of yesterday could not have been averted or minimized. People have called on the Ogun StateÂ  Government to send the tanker drivers away from the highway.

â€œI give thanks to God for sparing my life, even though I am still feeling pains all over myÂ  body,â€ he said.

A couple who lost two children to the accident were weeping profusely, when ourÂ  correspondent visitedÂ  the scene of the accident.

â€œMy children are in there. Somebody should help me, my children must not die,â€ the helplessÂ  woman cried as she called on passers-by to help rescue her children.

Another survivor, who identified herself as Salewa, also narrated her experience and why sheÂ  would organise a thanksgiving service in her church.

â€œMy brother, I donâ€™t have much to say. I promised to give thanks to the Lord. I boarded theÂ  bus from LagosÂ  to Ibadan. My hope and spirits were already in Ibadan for my mission only toÂ  see myself where I am here now. I donâ€™t have much injury, only this minor burns at my back.Â  I pray that those who were seriously injured recover speedily,â€ Salewa said.

P.M.NEWS gathered this morning that some victims who sustained minor injuries were taken toÂ  private hospitals in Mowe and Ibafo in Ogun State.

Those who had serious injuries were taken to Olabisi Onabanjo University Teaching Hospital,Â  OOUTH, Sagamu for treatment.

A top official of OOUTH told our correspondent that some of the victims who were brought toÂ  the hospital yesterday night had died early today. But he did not disclose the number ofÂ  those that had died.