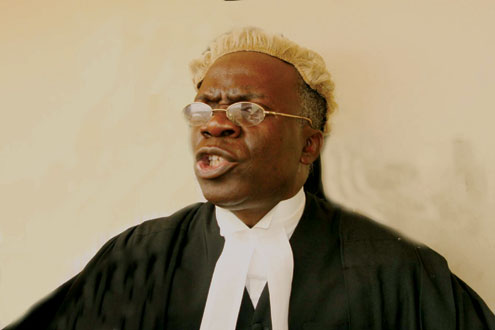 Falana who made this vow at the one year remembrance of the late Chief Gani Fawehinmi, heldÂ  at Ojota, Lagos State, called on Nigerians to stand against him.

â€œIt is sad to hear that somebody like Babangida is coming to rule us again after he hasÂ  brought Nigeria to collapse. Somebody like Babangida, who institutionalized corruption andÂ  has done enough harm to this country, still wants to rule us, I can assure you that we willÂ  stop him. Nigerians will not allow him,â€™â€™ he stated.

Commenting on the zoning controversy which nearly tore the ruling Peoples Democratic PartyÂ  (PDP) into shreds, Chief Falana blamed media for celebrating the issue, saying it is veryÂ  dangerous for the progress of democracy in Nigeria.

â€œInstead of promoting the zoning formular, the media should ask the politicians theirÂ  programmes for the Nigerian masses.

â€œOur media are not asking the politicians questions about poverty, bad roads and goodÂ  medical services, but only promote zoning. Babangida institutionalized corruption inÂ  Nigeria. I expect the media to ask him how he is going to arrest it, but they are not doingÂ  that. The people shouting zoning are using it and religion to deceive Nigerians,â€ he stated.

He expressed support for the January date set for general elections by INEC, saying: â€œIfÂ  Nigerians are determined, we can have successful elections in January. That is why we areÂ  appealing to our people to support the new leadership of INEC in ensuring that we allÂ  register and we make it one man one vote.â€

He commended the decision taken by INEC last week not to allow tenure extension of someÂ  governors and promised to stand by the organisation â€œto ensure that the riggers of election,Â  who ordinarily should have been punished by the law, do not profit from illegality.â€

Falana commended the Lagos State governor for the honour bestowed on the late Chief GaniÂ  Fawehinmi, adding that the late activist deserved all the honours that this country canÂ  bestow on him for his immense contributions to the development of this country and inÂ  defence of human rights and promotion of rule of law.

â€œThis is a challenge to all men and women of ideas and vision in Nigeria that someday,Â  whether they are alive or dead, they are going to be honoured by the people at theÂ  appropriate time. And for those that have engaged in the primitive accumulation of wealth,Â  this is a challenge to them too. If you made money and you donâ€™t invest in the people, youÂ  are going to be abandoned. Gani is gone but we are celebrating him, his integrity and notÂ  his wealth,â€ he said.