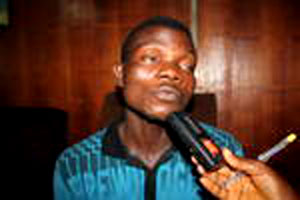 The girl, name withheld because she is a minor, lives at Richard Abimbola Street, IlasamajaÂ  with her father, Mr. Taofeek Daudu, and her stepmother Kafayat Daudu and had just finishedÂ  her primary school education.

One of the suspects is Mr. Jimoh Ojo, an okada rider, who lives in the same house with theÂ  victim. The victimâ€™s father is the landlord of the house while Ojo is his tenant.

Ojo has been arrested by the Lagos State Taskforce and is currently being detained. DuringÂ  his interrogation, he named three other men who also took part in raping the girl onÂ  different occasions.

The doctor attached to the Social Welfare Department, Lagos State Ministry of Youth andÂ  Social Development hasÂ  tested the girl HIV positive.Â  Ojo was also tested positive to theÂ  dreaded disease and is feared that he might have infected his wife with the deadly virus.

P.M.NEWS gathered that the four men had been having sex with the little for the past threeÂ  years, with the last romp carried out by Ojo taking place on 28 June, 2010.

The other accomplice, whose names were given as Sunday, Ojoâ€™s wifeâ€™s brother; Ade, a cousinÂ  to the raped girl and a man simply called â€˜Yellowâ€™ because he is light in complexion, areÂ  now at large.

The mother of Ade has been arrested and detained pending when her son, who is said to be inÂ  Ondo State would show up at the taskforce office and would be made to undergo HIV test toÂ  see if he too was infected.

The sex romp was exposed when the victim left her fatherâ€™s house to spend the holiday withÂ  her mother, Mrs. Latifat Daudu, who had parted way with her husband.

The little girl suddenly became seriously ill and on interrogation by her mother, sheÂ  revealed that the four men had been having sex with her. This led her mother to take herÂ  back to her former husbandâ€™s house where she revealed the whole secret.

At the Office of the Youth and Social Development where the girl, her father and theÂ  accomplice were taken to yesterday, the little girl allegedly confessed that Ojo had sexÂ  with her five times, while the other three men also had carnal knowledge of her.

According to her, it was Ojo who deflowered her three years ago and that the affair hadÂ  continued since then, saying that he last slept with her in June.

Ojo attributed his promiscuous act to the devil, saying â€œit is the work of the devilâ€.

According to him, the little girl used to knock at his door at night after he had returnedÂ  from his okada business to tell him she was hungry, saying that in the process, he sometimesÂ  had sex with her and gave her N100 as compensation.

He added that he had slept with her in the bathroom on one occasion, saying that sheÂ  normally complained that her family did not always take care of her.

Father of the victim, Taofeek told P.M. NEWS that he was not aware that Ojo used to sleepÂ  with his daughterÂ  in his own house, saying that immediately he discovered that, he gave theÂ  accomplice two weeks quit notice.

The victimâ€™s step mother debunked claims that she did not take care of her, which was whyÂ  she went to Ojoâ€™s apartment to beg for food.