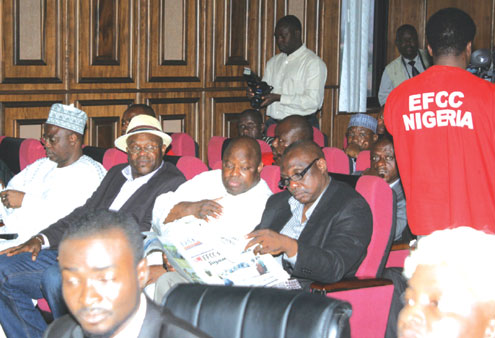 Former board members ofÂ  the Nigeria Footbtall Federation, NFF, Alhaji Sani Lulu, Chief Taiwo Ogunjobi, Dr Bolaji Ojo-Oba and Amanze Uchegbulaham, were this morning arrainged by the Economic and Financial Crimes Commission, EFCC, before Justice Okorowo of the Federal High Court sitting in Abuja on 10-count charge bordering on abuse of office, misappropriation of funds released by the Federal GovernmentÂ  for the 2010 World Cup held in South Africa.

They were alleged to have conspired to commit the offenceÂ  by refusing to follow due process in the procurement of two Mercedes Benz buses.

They were also accused of misappropriating the sum of N900 million, $1 million and $200,000 released to the NFF at various times without giving proper account.

The former executive members were also accused of booking a cheap, substandard, unbefitting and unlisted hotel not approved by FIFA for the lodging of the Super Eagles during the FIFA World Cup and caused the Federal Government to pay a fine of $125,000 for breaching the contract of FIFA.

They were also alleged to have conspired to abuse their offices with the intent to gain, corruptibly procuring the service of an unbefitting and faulty aircraft with an amount lower than what ought to be spent.

As at press time, the court was yet to rule on the bail application for the former NFF big wigs.