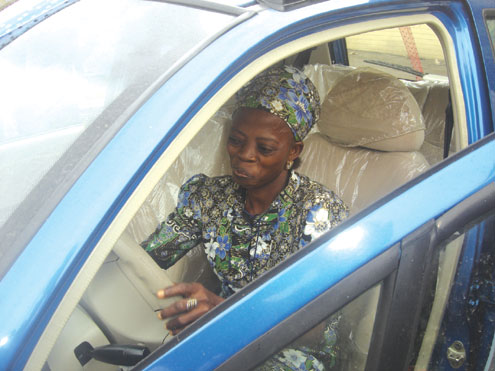 The woman shed tears of joy when she was receiving the car keys and documents from theÂ  chairman of St. Eve Concept, Dr. M.K. George Onyung at the corporate headquarters of theÂ  company located in Ikoyi, Lagos.

Speaking with P.M.NEWS, the indigene of Imesi-Ile, Osun State, who lives in Bariga, thankedÂ  God and the organisers, sayingÂ  â€œI canâ€™t describe how I feel because I never believed that IÂ  could win anything not to talk of a brand new car. I am very happy.â€

According to her, â€œOn Thursday, 2 September, 2010, I received a text message that I had wonÂ  a car and I should come to 15, Udi Street, Osborne Estate, Ikoyi the following day for theÂ  presentation. I didnâ€™t believe it because I thought it was fake until my son convinced meÂ  that we should go and confirm. Today, it is real and it has been confirmed.â€

Narrating how she got involved in the Health-Check Day 2010, Mrs. Fagbolu said: â€œI wasÂ  returning from my fatherâ€™s hospital in Jibowu when I saw St. Eve officials at Yaba, callingÂ  for medical check-up. I bought N200 ticket, after which I was given a check-up by theÂ  doctor.

â€œI didnâ€™t buy the ticket because of promo until Friday when I received a text message that IÂ  had won a car,â€ she added.â€

Speaking at the occassion, Dr. M.K George Onyung said: â€œWe want to prove to the world thatÂ  it is not all promos that are fake,â€ stressing that, â€œSt. Eve is an authentic company thatÂ  believes in credibility and integrity. We proved it.â€