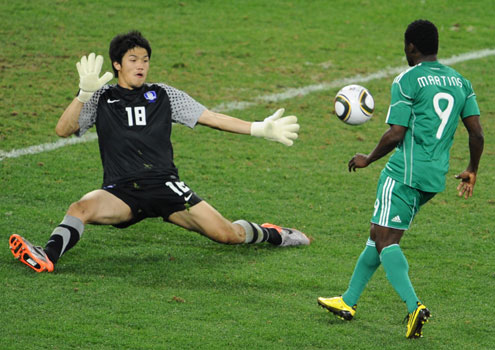 Super Eagles striker, Obafemi Martins is becoming a nightmare to many goalkeepers, and theÂ  Most Valuable Player, MVP, in Sundayâ€™s 2012 African Cup of Nations qualifier againstÂ  Madagascar has been described as a dangerous player.

Martins scored the first goal and assisted in the second netted by Michael Eneramo duringÂ  the qualifying match against Madagascar at the UJ Esuene Stadium in Calabar.

Despite his communication problems, Madagascar goalkeeper, Kardi Kassima, who conceded aÂ  goal from Martins, revealed after the encounter that the Nigerian forward was a hard nut toÂ  crack.

â€œLosing by two goals to Nigeria means that we are not push over. Agreed, itâ€™s painful thatÂ  we were beaten by the Eagles but my own nemesis in the match was Martins,â€ Kassima mutteredÂ  as the heavily armed Policemen in Calabar guarded the Nigerian team and their visitors fromÂ  Madagascar away from the huge crowd and journalists.

It was evident from Kassimaâ€™s lamentations that he actually went through psychologicalÂ  pressure throughout the qualifying match, which gave the Eagles three maximum points in theÂ  group that has Ethiopia and Guinea.

Martinsâ€™ pace and ball control prowess give him an edge over defenders during matches and heÂ  used these qualitiesÂ  against the Madagascans last weekend with a powerful header that shotÂ  Nigeria into the lead in the 18th minute.

â€œI think the credit of our match against Madagascar should go to the team as a unit. Yes, IÂ  scored and was adjudged the MVP after the game. Thatâ€™s okay but all the players played aÂ  part to achieve success against our opponents. I think we won the match as a team, thatâ€™sÂ  important to me,â€ Martins said.

However, Caretaker Coach, Austin Eguavoen, dedicated the 2-0 victory over Madagascar to theÂ  fans that thronged the Calabar Stadium to support the Eagles.

The coach was really impressed with the unalloyed support the team received since theyÂ  arrived the city last Thursday, saying, â€œThe goals from Martins and Eneramo were inspired byÂ  the unflinching support the team got before and during the match. So I dedicate the win toÂ  them.â€

He described the venue as a good ground for the tie, adding that they were happy with theÂ  choice of Calabar as venue for the match.

â€œIt is absolute falsehood that I complained about the choice of Calabar to anybody either inÂ  private or public. How could I complain about a decision that I participated in taking withÂ  the agreement of my playersâ€ asked Eguavoen.

The Eagles coach revealed that the moment they were informed that the Federal GovernmentÂ  wanted to use the National Stadium Abuja for the ECOWAS games, which is a multi-sportsÂ  event, he contacted his players.

â€˜â€˜I contacted my players about two weeks ago and told them we have to move in theÂ  interestÂ  of the nation. Kaduna or Calabar were the alternative venues.

â€œThe players unanimously agreed that we move the match to Calabar because Kadunaâ€™s weatherÂ  is hot, while that of Calabar is akin to that of Europe. In fact Vincent Enyeama wasÂ  thrilled with the choice of Calabarâ€™â€™.

The icing on the cake for the Eagles after Sundayâ€™s victory was the N10 million donationÂ  they received from the Cross River State Governor, Liyel Imoke. The Nigerian team alsoÂ  received the sum of $9,000 for their 9 shots on target during the encounter.

Meanwhile, Guinea, who scored four unreplied goals against Ethiopia are first on the tableÂ  while the Eagles are second ahead of Madagascar and Ethiopia who are third and fourthÂ  respectively.