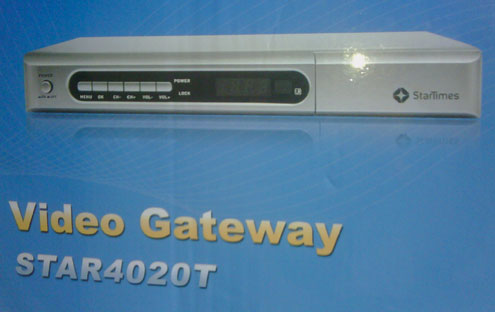 If the claims of the management of Star Television Network Limited is anything to go by, itÂ  appears that the kind of revolution that happened in the telecommunication sector of theÂ  Nigerian economy is about to take place in the pay television sector.

At its official launch in Abuja early this year, the management of the technology companyÂ  which also pioneered pay television industry in China, promised Nigerians greater access toÂ  pay television services at an unbelievably affordable price.

Unlike other cable television services already operating in the country, Startimes usesÂ  Digital Video Broadcast on Terrestrial (DVB-T), a new technology which does not require aÂ  dish. It comes with just a decoder which is sold for N9,000. The technology guaranteesÂ  stable signal in bad weather conditions like gusty and rainy days. It also eliminates theÂ  usual cost of installation.

There is no doubt that Startimes Cable Television services is a laudable revolution.Â  Subscribers of the service have testified to the effeciency of the package, while some,Â  however, are skeptic of the durability of the decoders and the continued efficiency of theÂ  services.

Some say with the notoriety of Chinese products in the Nigerian market, the services mayÂ  just be a hype after all.

Responding to these fears, the Publicity Manager, Mr. Chidi Celestine Umeibe, assuredÂ  Nigerians that with what the owners of the company have put on ground in terms ofÂ  investment, it is in the country for quality and efficient service.

According to him, â€œwe know the kind of fears that Nigerians have about Chinese products butÂ  we want to assure them that we are here for good. We have a strong partnership with theÂ  Nigerian Television Authority (NTA). In China, we have overÂ  seven million subscribers andÂ  the company has been in existence since 1988. We are also in many African countries and weÂ  hope to spread to over 20 countries on the continent in the next five years.

â€œAlso, we have other projects in line, so Nigerians should be assured that we are here forÂ  good and that our services can only improve.â€

To some consumers who spoke to Consumersâ€™ Advocate, the content may not be as fantasticÂ  compared to other cable television providers in the country. Since most of the channels onÂ  the network are free-to-air stations, some reason that it is just a clever idea to getÂ  peopleâ€™s money.

Responding to some of these observations, the companyâ€™s Media Manager said â€œwe quiteÂ  understand the expectations of our subscribers. They want sports and we are working hard toÂ  meet their expectations soon. However, we want them to understand that the reason we featureÂ  local league matches is to encourage the countryâ€™s football development. As for the numberÂ  of channels we have currently on the network, some of them are free-to-air channels but thatÂ  does not, in any way, reduce the richness of the programmes featured on such channels.

A subscriber, Dan Shuaibu, who claims he has bee using the service for over two months, hasÂ  this to say about the service:

â€œReally, I think it is a fantastic service. At least, those of us who could not afford cableÂ  television before, now have an opportunity to own one now. The content is okay but I thinkÂ  they can improve. I am a sports lover and naturally I expect them to feature current leagueÂ  matches. For now, the popular league games are not featured in any of the channels on theirÂ  network. Well since they are just starting, may be with time, they will improve.

Another subscriber Michael Adewale said he has been enjoying the cable television since heÂ  bought it but that he would have loved it if premiership matches were featured in any of theÂ  sports channels. â€œItâ€™s a good service. The technology is commendable. I bought it about aÂ  month ago and I must tell you that the service is goodâ€

Linda Adams who has experienced a problem with the services said â€œI noticed during aÂ  particular period that the film I was watching froze.Â  Maybe it was because I did not use anÂ  external antennae but sometimes the channels keeps shaking.â€

Explaining why Linda and other subscribers may be experiencing such problem, Celestine saidÂ  â€œsome of our subscribers donâ€™t follow the right instruction. We tell them to use externalÂ  antennae if they discover that the channels are not stable. We have been receiving a lot ofÂ  complaints from subscribers on some many issues and I am glad to tell you that we have beenÂ  able to resolve the entire problems for them. Besides, we have a customer care unit that isÂ  very responsive.â€

For now, Startimes appears to be doing well, Consumersâ€™ Advocate hopes that the efficiencyÂ  of the network will not drop over time as have been the case with other cable televisionÂ  providers in the country.