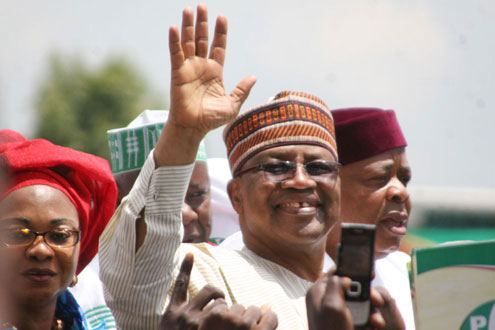 Former military president of Nigeria from 1985 to 1993, Gen. Ibrahim Badamasi Babangida this afternoon in Abuja formally declared his intention to contest the presidential election slated for January 2011.

At the declaration ceremony held at Eagle Square, Abuja and before a crowd of his supporters, IBB said, for almost two decades, especially since the democratic dispensation commenced, people have been asking him if he had the intention to participate in the political process.

â€œAfter a serious reflection, today, I am convinced and determined to take on fully the challenges facing the country,â€ IBB told his supporters amid shouts of â€˜IBB, power,â€™ â€˜PDP, power to the people.â€™

He said his involvement in politics has taught him that good governance is all about meeting the needs of the people. This, he said, he wanted to do by insisting on transparency and accountability, stressing that EFCC and ICPC would be sustained to fight corruption.

IBB promised to utilise Nigeriaâ€™s resources to diversify the economy to stop the overdependence on oil and gas, and poverty alleviation.