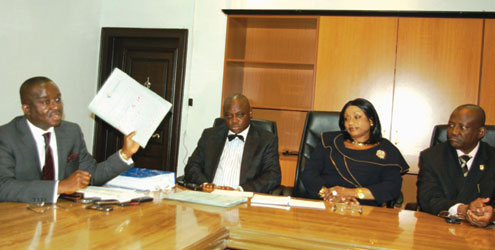 Also, contrary to police allegation that the Group Managing Director of the bank, Mrs. SolaÂ  Ayodele has fled to the United States of America, she is in Nigeria.

A newspaper report had recently alleged involvement of the Spring Bank new management inÂ  fraud and economic crimes estimated at about N5.2 billion. The paper had stated that theÂ  Federal Attorney General and the Justice Minister, Mr. Bello Adoke, has filed five chargesÂ  against the Group Managing Director/Chief Executive Officer of Spring Bank Plc, Mrs. SolaÂ  Ayodele and other management staff of the bank who were purported to have obtained the moneyÂ  from a company, Strand Capital Partners Limited (SCPL).

But Spring Bank, in a statement by Igwe U. Igwe, head, Brand Management, debunked the fraudÂ  allegations in its entirety, stating that there was no money in the SCPL account in theÂ  first instance as to warrant a theft.

Rather, the bank said what is at issue is a long drawn criminal manipulation of facts byÂ  SPCL and Secure Electronic Transactions Plc (formerly known as National Sports LotteryÂ  (NSL)), two companies owned by the Kola Daisi family, to fraudulently obtain the sum ofÂ  N5.2bn from the vaults of the bank.

A matter filed by Spring Bank in 2009 seeking the payment of over N7bn indebtedness by NSLÂ  is currently in the Federal High Court, Lagos Division before Justice Okechukwu Okeke and isÂ  receiving due attention.

According to the statement, â€œthe Suleyman Ndanusa-led interim management of the bank betweenÂ  2007 and 2008 purportedly approved N5.2billion for Strand Capital, who were underwriters toÂ  the failed NSL Initial Public Offer of 2008.

â€œHowever, the transaction was reversed by the Charles Ojo-led management under the BankÂ  PHB/Spring Bank acquisition exercise, on the directive of the Central Bank of Nigeria, whichÂ  also ordered the termination of the transaction.

â€œThe CBN directive was premised on the fact that the transaction did not follow due processÂ  and clearly showed an abuse of Corporate Governance. A typical example of the illegalityÂ  perpetrated in the purported approval of the facility is the fact that a former GeneralÂ  Manager of Spring Bank, Dr. Tunji Sobodu, who facilitated the transaction was at the time,Â  also a director of Strand Capital.â€

According to the bank, â€œthe facilitation was also done in conjunction with the formerÂ  Treasurer of the bank, Dapo Adeyemi-Bajo, who now works with NSL. The purported approval ofÂ  the N5.2bn facility neither passed through the Management Credit Committee, the Board CreditÂ  Committee nor the Interim Management Board at the time.â€

The bank which has faulted the arraignment of the present GMD/CEO and other staff of theÂ  bank, who were not party to the transaction, has already secured an order of court,Â  restraining the police from carrying out the threats of arrest.

Sources close to the bank disclosed that the management staff of Spring Bank mentioned inÂ  the arraignment, have also alleged assassination threats on their lives after attempts toÂ  induce them with several millions of naira to co-operate with NSL/SCPL in the release ofÂ  N5.2 billion failed.