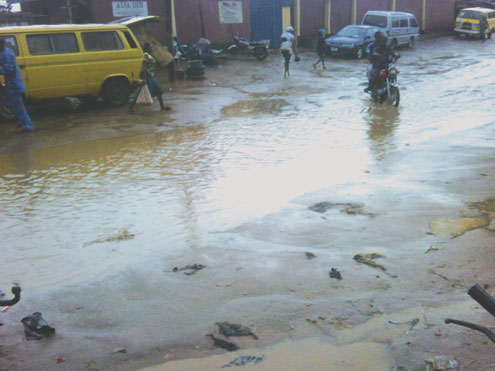 It was a smooth drive from Iyana-Ipaja and the commuter bus, Lagosians call them danfo, wasÂ  bound for Ayobo, Ipaja, a suburb of the metropolis.

Minutes into the journey, the bus started dancing to the rhythm of the potholes and failedÂ  spots on the stretch of road. The dancing bus jiggled the passengers around, tossing them toÂ  and fro, like stones in a can. It was clearly not a pleasant journey, and even the driver ofÂ  the bus was already sweating, struggling with the steering, just to keep the vehicle on theÂ  road. It was indeedÂ  nightmarish.

A child strapped to its motherâ€™s back hit its head on the roof of the bus and while theÂ  other passengers sympathized with the mother, the driver quickly informed them that theyÂ  were in Ogun State. â€œI am sorry to inform you that you are in Ogun State where nothing seemsÂ  to be working,â€ he said, wiping his face with a handkerchief.

This piece of information from the driver sparked a discussion which quickly degeneratedÂ  into an argument. Some passengers believed that the entire Ipaja and Ayobo are part of OgunÂ  State while others claimed that the driver was only being mischievous.

The roads in Ipaja-Ayobo have been neglected judging from the dilapidated network in theÂ  area. Residents of the area told P.M.NEWS Metro that they were not sure if they were stillÂ  part of the state. Some of them even asked what sin they have committed to warrant suchÂ  neglect.

Another resident of the area, who gave his name simply as Idowu, said the people of the areaÂ  had resigned themselves to fate. â€œIf our leaders can do this to us, what do you expect us toÂ  do? We can only pray to get the right person for both the state and the local government inÂ  the 2011 election.

Reminded that the perception of the people of the state was that the governor is doing well,Â  she asked how they came by such assessment, adding that anybody who wants to actually rateÂ  the Governorâ€™s performance should first visit the area.

Emmanuel Ojo, who said he had lived in the area for about four years, explained that when itÂ  rains, the entire road becomes un-motorable.

â€œLike they say, when it rains, it really pours. Residents can’t go out or come in as theÂ  entire area is flooded. You can imagine how many workers living here have received queriesÂ  in their various places of work. You can imagine how many people have been sacked forÂ  getting late to their places of work. When people are told to stop collecting money and foodÂ  to vote for candidates, they think one is unreasonable, but this is a clear example of theÂ  consequence.

He said though government officials had been to the area a number of times, the visits haveÂ  not given them any respite. â€œIn fact, the more they visit us the more they tend to forgetÂ  about us,â€ he added.

He complained that as part of the mega city project of the state government, the plight ofÂ  the people of the area should be taken into consideration because of the number of peopleÂ  who reside there. He maintained that the area was metropolitan in nature and always busy,Â  â€œso I think there is an underlying reason why we have been forgotten,â€ he lamented.

A driver who operates on the route, Sunday Owodunni, lamented that they spend more moneyÂ  repairing their buses than what they earn from the job. â€œThe road is so bad that sometimes,Â  we find it difficult to work.

“Sometimes, we do not even want to work because we are not encouraged to do so because ofÂ  the bad state of the roads. I have heard about roads being constructed by the stateÂ  government but I am yet to see anyone around here.â€ He threatened that the people of theÂ  area might be forced to boycott the next elections in the state as a result.

â€œWhen it rains we are in problem. During the dry season too, we are in problem, because ofÂ  dust. We are tired of their promises and we have resolved that if they like they should doÂ  it. If they donâ€™t do, it would continue to be a shame to them and their government. TheÂ  people of the area would continue to remember them as leaders who had the opportunity toÂ  solve the peopleâ€™s problems but refused to come to their aid.

Speaking on the road, Special Adviser to the Governor on Works and Infrastructure, Engr.Â  Ganiu Johnson said the road would be considered as part of the second phase of theÂ  Iyana-Ipaja-Isheri Olofin-Ikotun road construction project. He said this recently during anÂ  inspection tour of ongoing road projects in the state.

He explained that after the completion of the first phase being handled by PlyconÂ  Construction Company, the government would look towards the direction of the road.