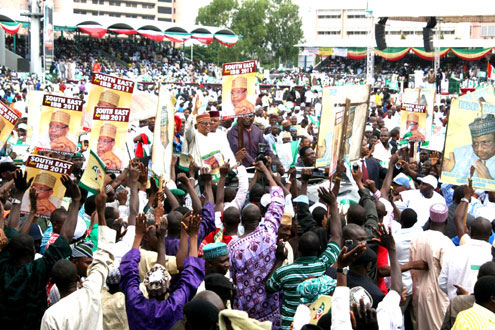 P.M.NEWS checks have revealed that the desperate general, who annulled the freest electionÂ  in the country in 1993, rented at least 50 support groups and NGOs in the bid to hoodwinkÂ  unsuspecting Nigerians into believing that he has remained popular.

However, the secret was blown open when the rented crowd protested yesterday in front ofÂ  Niger State Government House in Minna over non payment of allowances promised them by theÂ  State Government and politicians who contracted them for the rally.

â€œForty-five 18-seater buses were hired to convey us to Abuja with a promise that each oneÂ  of us will be paid N5, 000. We fulfilled our own side. We went to Abuja, shouted and dancedÂ  for IBB. The whole world saw us but instead of Niger State government fulfilling their ownÂ  part, they all ran away living us with nothing,â€ Musa M. Rabo told journalists during theÂ  protest.

Musa Ubale and Tijjani Umaru, leaders of other groups disclosed that they are not supportingÂ  IBB but travelled to Abuja because of money.

They alleged that food and allowances promised them were not given to them when they got toÂ  Abuja.

â€œWe left for Abuja as early as 7 a.m. on Wednesday from Minna and came back at about 1 a.m.Â  Thursday without breakfast, lunch or dinner. We were told that money was released by theÂ  state government (Niger) but some few people want to hijack it,â€ a protester said.

When contacted, one of the leaders who hired the thugs confirmed that some of the groups areÂ  yet to be paid as agreed with the group.

â€œNow I am in Abuja. Please, donâ€™t mention my name please,â€ he pleaded.

Chairman IBB Vision 2011, Alhaji Ubale Marafa Kagara, said that they paid all the membersÂ  what was promised.

â€œThose you see protesting are not our members. We paid our people their money as promised.Â  You know, there are other groups from government side, some from PDP and others from NGOsÂ  like us,â€ Kagara said.

P.M.NEWS learnt that Niger State government through the office of the Secretary to the StateÂ  government released money for mobilisation of youths and NGOs for the IBB support rally inÂ  Abuja.

â€œThat is why you see them in government house not IBB campaign office. Governor Maâ€™azuÂ  Babangida has released money for the job,â€ says a government official who did not want hisÂ  name mentioned.

Special Assistant on Mobilization to Niger State government, Alhaji Yahuza Abdullahi, whoÂ  has been accused of withholding the money, was seen pleading with the protesters. He leftÂ  after he sighted journalists.