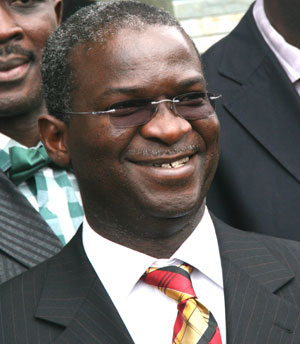 Friday 10 September was a day of double celebration for the Lagos State Governor, Mr.Â  Babatunde Fashola. Apart from the light shower that ushered in the Id el Fitri, it was aÂ  day for the governor to blow his trumpet and cause the people of the state to appreciateÂ  his efforts in the development of the state.

It was a day he celebrated his 1200 days in office. The theme of the event was InclusiveÂ  Government for More Rapid and Sustainable Development.

While the day was primarily meant to tell the people what he has been able to achieveÂ  within the last 100 days, it was a time to commence a subtle campaign for his second termÂ  in office as several of his loyalists wore shirts with his photographs and theÂ  inscription: One Good Term Deserves Another. The event was held in the three senatorialÂ  districts of the state.

The State Commissioner for Sports, Prince Ademola Adeniji-Adele, confirmed this when heÂ  told the gathering at the Akande Dahunsi Memorial School, Osborne, Ikoyi, venue of theÂ  event in the Lagos Central Senatorial District, that part of the reasons for the eventÂ  was to support the Governor in his bid for re-election.

The commissioner added that members of the State Executive Council had resolved to rallyÂ  round him to ensure that he successfully wins the 2011 governorship election in theÂ  state, highlighting his achievements as part of the edge he has over contenders.

While enumerating the achievements of the state government so far, the State AttorneyÂ  General and Commissioner for Justice, Olasupo Sasore, said Lagosians would soon begin toÂ  see the effects of the road construction, dualisation and drainage system that areÂ  currently going on in Surulere area of the state.

He talked about the upgrade of roads in Ebute-Meta while advising that the people shouldÂ  help in keeping the roads clean always. He added that the state government was makingÂ  frantic moves to deliver the Eko Atlantic City project.

The Attorney General said the state government was aware of the challenges faced by theÂ  people as a result of irregular power supply. This, he said, was the reason theÂ  government embarked on street lighting independent of PHCN in the state to enhance nightÂ  life and security.

While stressing that the government would not continue to fold its arms, he said theyÂ  were building a relationship with a company known as Island Power, â€œto deliver severalÂ  megawatts of electricity by January 2011 on Lagos Island to ensure that 20 streets haveÂ  uninterrupted power supply.

â€œWe have commenced the rehabilitation of Magistrate and High courts in the state andÂ  barely 20 days ago, the governor handed over the largest complex with 22 court rooms,â€ heÂ  explained.

In the area of housing, he said the state government is making sure that more landlordsÂ  would emerge with the mortgage scheme that the governor is to flag off soon. He also saidÂ  a private company has been engaged for the execution of 10,000 houses, 200 which would beÂ  delivered soon.

He said the old Broad Street Prison, which was taken over by the government has beenÂ  turned into the Freedom Park, which would be opened as part of the Independence DayÂ  celebration.

The governor, represented by his Deputy, Princes Sarah Sosan, said the government hadÂ  done its best in several areas in making the environment conducive for the people addingÂ  that till date, his government had delivered 151,254 kilometres of high grade roadsÂ  spread across the three senatorial districts.

He said his government had upgraded about 100 primary health centres so far.

However, residents of Eti Osa lamented that they lacked good schools, hospitals and otherÂ  social amenities.

They also complained that they have no public cemetery and expressed fears that theÂ  people may be disinterested in the governorâ€™s second term bid. But the Deputy GovernorÂ  told them that the government would come to their aid soon, just as she highlighted someÂ  projects the government had executed in the area.