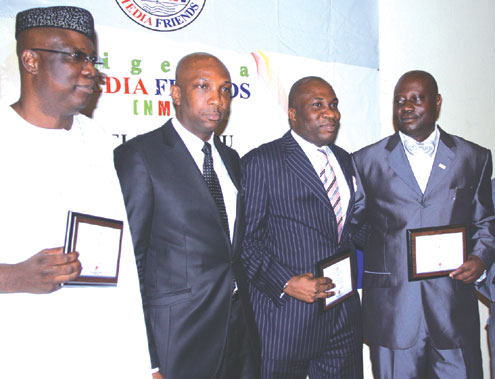 Senatorial aspirant in Ekiti Central District, Ekiti State, South West Nigeria, Mr. Babafemi Ojudu; the Editorial Board Chairman of The Guardian Newspaper, Mr. Reuben Abati and 14 other journalists were at the weekend honoured for their outstanding contributions to the media industry and the entrenchment of democracy in Nigeria.

The Nigeria Media Friends (NMF) which honoured the 16 accomplished journalists at the Sheraton Hotel and Suites, Ikeja, Lagos, South West Nigeria, disclosed that they were selected among 1, 000 applicants.

The applicants, NMF said, were practicing or former editors who had spent a minimum of 10 years in the journalism profession in the country.

NMF Chairman, Mr. Chris Kehinde Nwandu, said that the award aims at recognising outstanding journalists who are often not recognised by the Nigerian government.

The President of the Nigeria Union of Journalist who was represented by Mr. Ayo Adebayo wondered why the Nigerian government has failed to recognise journalists such as Ojudu and Abati who have accomplished so much for the progress and stability of Nigeria.

â€œWe donâ€™t recognise our own. That is why we are finding it difficult to bag national awards. We want to congratulate Babafemi Ojudu. He was among the people who put their lives on the line for the entrenchment of democracy in Nigeria.

â€œWe wish you Godâ€™s support and we see you as an agent of change. We want to see you as our representative at the National Assembly,â€ the NUJ President said.

The Head of Service in Ondo State, Mr. Ajose Kudehinbu, who represented Governor Olusegun Mimiko, while congratulating the organisers of the award for their foresight, also charged journalists to always strive for excellence.

He said that Ondo State will continue to partner with the media for a better society.