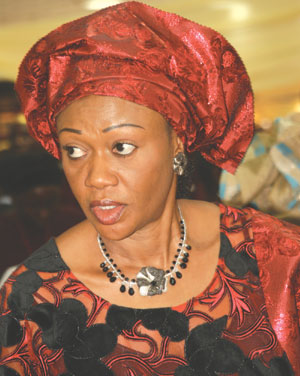 Prominent dailies were awash this morning with congratulatory messages to felicitate withÂ  the former first lady of Lagos State.

The messages included a full page colour advert by Asiwaju Tinubu himself in which theÂ  former governor waxed lyrical about his wife: â€œI celebrate you, my darling wife, todayÂ  and always. Today your 50th birthday is a golden day, a golden year of a productive andÂ  fulfilling life.

â€œYou came from a humble but great background. But you have risen to the zenith of publicÂ  service, especially when the cause is of the downtrodden and the underprivileged.Â  WithinÂ  these past 50 years, I canâ€™t believe the young lady I knew virutally yesterday, dated andÂ  married, would still remain like a 21-year old!Â  And this, with all the tribulations andÂ  challenges of my political struggles!â€

As part of the activities to mark the day, Mrs. Tinubu and her family played host toÂ  Muslim clerics who led the prayer session at the Bourdillon, Ikoyi, Lagos, home of theÂ  Tinubus this morning.

In appreciation of her contribution to the state in particular and humanity in general,Â  the Lagos Island Local Government named Yaba Council Hall after her.

Similarly, the Federal Government of Nigeria honoured Mrs. Tinubu with the Officer of theÂ  Order of the Niger, OON award.

Mrs. Oluremi Tinubu was married to Asiwaju Tinubu for over two decades and they areÂ  blessed with children.

The founder of New Era Youth Foundation and Spelling Bee contest for secondary schoolÂ  students, Mrs. Tinubu had earlier informed invited guests and admirers that mediaÂ  congratulatory messages, gifts, cards and other presents should be minimised or at bestÂ  monetized to ensure the completion of New Era Youth Campaign, NEYOCA, office which sheÂ  has been building since 2007 at Akodo.

Among her pet projects, the Spelling Bee Competition has churned out bright boys andÂ  girls. The winner of the yearly competition among students of public schools in Lagos, isÂ  made governor of Lagos State for one day.