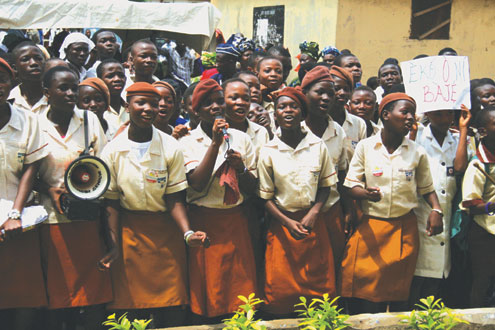 The Global Campaign for Education, GCE, has released a scathing report about Nigeriaâ€™sÂ  education, saying the country has the worst enrolment in the world.

The report, coming at a time Nigeria is marking its 50th anniversary with glee, wasÂ  released yesterday on the sidelines of the United Nations Millennium Development GoalsÂ  summit.

According to the report, Nigeria has more children out of education than any country inÂ  the world; with a total of 8.2 million children of school age out of school.

â€œThis is made all the more appalling by the fact that Nigeria is far from poor, byÂ  African standards. On paper at least it is among the continentâ€™s richest countries, theÂ  worldâ€™s sixth largest producer of crude oil.â€

GCE, which was backed by aid groups such as Oxfam, Save The Children and Action Aid, inÂ  making the report, said that â€œdecades of failure to invest in education have left theÂ  basic school system hardly functioningâ€ in Nigeria.

Somalia, stricken by more than two decades of civil war, has been declared the worldâ€™sÂ  worst place to go to school, in the GCE report.

â€œOngoing conflict, civil unrest and fragility have had a catastrophic effect onÂ  education, with the most recent data estimating that only 10 percent of children areÂ  enrolled in primary school,â€ said the GCE.

Somalia was one of four countries where more than 70 percent of the population isÂ  illiterate, GCE said.

It came bottom of a table of the worldâ€™s 60 poorest countries, just behind Eritrea,Â  Haiti, Comoros, Ethiopia, Chad and Burkina Faso.

â€œThe â€˜School Reportâ€™ table findings paint a stark picture of the lives of children fromÂ  around 60 of the poorest countries, demonstrating that a dramatic upscaling of effort isÂ  needed in order to give the next generation better prospects than their parents,â€ saidÂ  the report.

â€œA country like Chad, languishing close to the bottom of our table, has shockingÂ  indicators across the board: just 14 percent of its population go to school for fiveÂ  years, child labor and early marriage are rife, and two-thirds of adults cannot read orÂ  write.â€

Adult illiteracy remains â€œa major stainâ€ on efforts to end poverty with 759 millionÂ  adults, the majority of them women, unable to read and write, said the campaign.

Half of the illiterate adults in the world live in South Asia, particularly inÂ  Afghanistan, Pakistan and Bangladesh. â€œIlliterate adults and their families struggleÂ  without even the most basic of skills to navigate life, access healthcare for theirÂ  families and enter the labour market,â€ said the report.

Haiti has always had a poor education record and was bottom of the rankings in 2008, withÂ  just half of children attending primary schools. The earthquake in January has madeÂ  education in the impoverished state even more desperate, with 80 percent of schoolsÂ  destroyed.

GCE said that fewer than 20 percent of Afghan women are literate and barely any girls inÂ  rural areas were allowed to go to school.

The report also gave marks to donor countries for their contribution to the financingÂ  needed for universal education, based on their respective wealth. Norway came top and theÂ  United States bottom.

â€œThe miserly performance of the G8 nations plays a major part in holding back progress â€”Â  some 87 percent of the gap is attributable to their failure to pay up,â€ said the report.

Somalia named the worst place to go to school