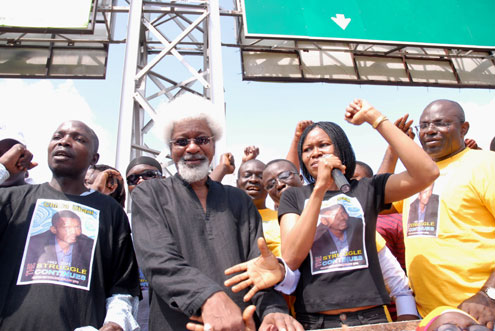 â€¢Prof. Wole Soyinka (m) with other human rights activists during a rally in Lagos this morning to mark the 5th anniversary of the death of Chima Ubani. PHOTO: Akin Farinto.

If heaven was manned by the Nigerian police, Angel Gabriel would ask those killed inÂ  motor accidents to go back to the world and get police reports, Prof. Wole Soyinka hasÂ  said.

The Nobel Laureate said this while lamenting the activities of the police this morning atÂ  a gathering to mark the 5th anniversary of the death of the former Executive Director ofÂ  the Civil Liberties Organisation, Comrade Chima Ubani, in Lagos.

The event, organised by Dr. Joe Okei-Odumakin of the Campaign for Democracy, had hundredsÂ  of civil and human rights activists in attendance.

According to Soyinka, who lamented the death of Ubani, the issue of doctors gettingÂ  police reports before commencing treatments on individuals had caused more harm than goodÂ  in the country.

He described the late Ubani as a victim of democratic struggle, adding that the lateÂ  activist and Dr. Beko Ransome-Kuti were part of the struggle that saw the birth of theÂ  Democratic Front for Peoples Federation.

Soyinka accused the police of causing several deaths, saying they should be heldÂ  responsible.

He said the late Ubani, after being hit by a careless driver, could not get treated byÂ  doctors because they needed a report from the police.

â€œThis man, still breathing, savable, was taken to eight hospitals, I repeat, eightÂ  hospitals, but he would not be treated unless he had the police report,â€ Soyinka said.

He advised the Inspector General of Police, Abubakar Ringim, to revoke the decision onÂ  police report describing it as worthless.

Chima Ubaniâ€™s last months on earth were taken up with coordinating the response toÂ  another increase in the price of petrol introduced by the Federal Government.. He wasÂ  killed in a car crash on the way back from a rally in Maiduguri on 21 September 2005.

Those who attended the event displayed placards calling on Nigerians to stop formerÂ  military President Ibrahim Babangida from contesting the 2011 presidential election,Â  reminding them that he was the one who killed the countryâ€™s hope in 1993 by annulling theÂ  presidential election won by the late MKO Abiola.