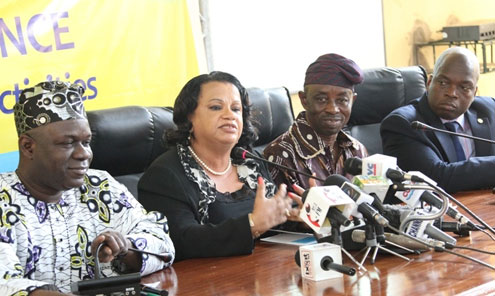 â€¢Secretary to the Lagos State Government and Chairperson, Organizing Committee for the forthcoming celebration of the 50th Anniversary of Nigeriaâ€™s Independence in Lagos State, Princess Adenrele Adeniran Ogunsanya (2nd left), with the Commissioner for Home Affairs and Culture, Hon. Tunde Balogun (left), member of the Committee and Film Producer, Mr. Tunde Kelani (2nd right), and the Senior Special Assistant to the Governor on Media, Mr. Hakeem Bello (right), answering questions, during the World Press Conference on the celebration, held at the Bagauda Kaltho Press Centre, Alausa, Secretariat, Ikeja, Lagos, yesterday.

Lagos State Government on Wednesday announced its comprehensive plan to commemorate theÂ  attainment of 50 years of nationhood by the country with a line- up of activities thatÂ  are aimed at reminding all Nigerians about the past and aspirations for the future.

The plan was unveiled at a press conference addressed by the Chairperson of theÂ  Organizing Committee of Nigeria at 50, â€˜Lagos Celebratesâ€™ and Secretary to the StateÂ  Government (SSG), Princess Adenrele Adeniran Ogunsanya along with the Commissioner forÂ  Home Affairs and Culture, Alhaji Tunde Balogun at the Bagauda Kaltho Press Centre,Â  Alausa.

Princess Ogunsanya explained that Lagos State has decided to be involved in preparationsÂ  for the celebration of the 50th anniversary of the country because it was right here inÂ  Lagos that the British flag was lowered and Nigeriaâ€™s flag hoisted to signal attainmentÂ  of independence.

She added that the event will kick off with State Interdenominational prayer for MuslimsÂ  at the Central Mosque, Lagos on Friday, September 24, 2010 while a Photo/Art ExhibitionÂ  and Book Presentation and Review titled â€œLagos Ancient to Modern, 1960 to 2010â€ will holdÂ  from 10am to 7pm daily at the Federal Palace Hotel, Ahmadu Bello Way, Victoria Island,Â  Lagos.

Also included in the line-up of activities to mark the Golden Jubilee of Nigeria in LagosÂ  State is the handover of Old Peoplesâ€™ Home at 1 Lancaster Road, Yaba, Lagos from 11 a.m.Â  on Saturday September 25 and the holding of a Nigerian Independence Corporate Run withÂ  the theme: â€œLetâ€™s run for a greater Nigeria and Brighter Rewarding Futureâ€ from theÂ  Tafawa Balewa Square to Lagos (Atlantic) Bar Beach on Sunday, September 26 while a BoatÂ  Regatta is billed to hold on Monday, 27 September at the Boat Club Awolowo Road, Ikoyi byÂ  10am.

The Secretary to the State Government (SSG) also listed four main plays to be staged asÂ  part of the celebrations with the titles â€œYeepa! Solarin Nboâ€ produced by renownedÂ  filmmaker Tunde Kelani and Mufu Onifade at Muson Centre, Lagos and National theatre,Â  Iganmu from Friday September 24 to 29, 2010; â€˜Oluronbi: the musicalâ€™ showing at MusonÂ  Centre, Onikan and National Theatre, Hall 1 from September 25 to October 3, 2010;Â  â€œFERE-BI EKUN: A Callous and Notorious Brigandâ€ showing at Glover Hall, Ikoyi onÂ  September 28, 2010 written by Adebayo Faletiwhile â€œAjantalaâ€ produced by Mr. Femi RobisonÂ  would be screened at the Muson Centre, Lagos and the National Theatre Iganmu on OctoberÂ  9, 15 and 16 .

Princess Ogunsanya also said a programme to celebrate Lagos ethnic food dishes andÂ  culture with the theme, Sound Style and Cuisine of Lagos would hold in the five divisionsÂ  of the State on September 29 by 6pm while on Thursday September 30, the Governor, MrÂ  Babatunde Fashola (SAN) would hand over the old prison site on Broad Street which hasÂ  been redeveloped into a recreation complex named Freedom Park.

Other programmes lined include are a fireworks celebration at Midnight on September 30 atÂ  the Marina Waterfront, while on October 1st which is the 50th Independence Day, anÂ  Independence Parade would hold at the Tafawa Balewa Square from 8am while anÂ  Interdenominational State Christian prayer holds at the Chapel of Christ the Light,Â  Secretariat, Alausa on Sunday, October 3, 2010.

Also speaking, the Home Affairs and Culture Commissioner, Alhaji Tunde Balogun said theÂ  State Government decided to rehabilitate the site of the old prison because of itsÂ  significance as well as to encourage people to relax as several amenities are in place atÂ  the Park where people can unwind.

While speaking on what informed the choice of stage for most of the plays to be stagedÂ  during the celebrations, ace cinematographer and film producer, Mr. Tunde Kelani said theÂ  theatre remains the centre of creativity which holds the society together.

He said the plays being presented represented an opportunity to appraise and return theÂ  stage to where it ought to be, adding that the choice of the plays were meant to provokeÂ  thoughts, stimulate moral and ethical rebirth as well as entertain as the nationÂ  celebrates.

In his contribution, a foremost actor Mr. Femi Robinson commended the presentÂ  administration in Lagos for bringing back the Lagos of old adding that Lagos is NigeriaÂ  and even before Independence, Lagos represented Nigeria.

He said he plans to use the staging of the play â€˜Ajantalaâ€™ to expose the young ones toÂ  the significance and evolution of Lagos State over the years adding that it would beÂ  provide an opportunity telling our own stories while attracting young people to theÂ  theatres by giving them opportunity to act.

While giving an insight into what the Photo and Art exhibition would offer, the curator,Â  Mr. Olusegun Adejumo said the exhibition will celebrate Lagos (Eko) from Independence inÂ  1960 to 2010 through landscapes, architecture, lifestyle and fashion, music, festivals,Â  Government and politics, markets, education, transportation and historical events.

Mr. Adejumo added that it will depict the transformation of Lagos, post independence toÂ  2010, in pictures and paintings of old and contemporary masters and accomplishedÂ  photographers.

Also speaking the Senior Special Assistant to the Governor on Media, Mr. Hakeem BelloÂ  underscored the vital role which Lagos played even before the evolution of Nigeria asÂ  nation right through to independence and as the nationâ€™s capital, adding that thisÂ  underscores the celebration of the countryâ€™s attainment of 50 years of nationhood by theÂ  present administration.

Mr. Bello, however, noted that apart from the celebration of all that is noble in us asÂ  a people, the occasion is being used by the administration to further stimulate economicÂ  growth and facilitate the creation of prosperity as a result of the diverse professionalÂ  groups that are engaged in the various programmes facilitated through public and privateÂ  sector partnership.