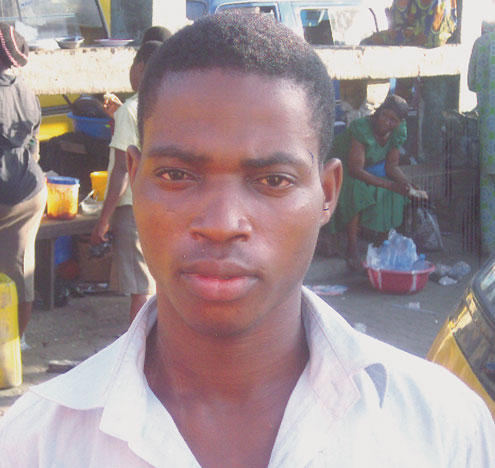 The 100-level student, who recounted his ordealÂ  with the ritualists, warned commutersÂ  plying the Shagamu, Ijebu-Ode-Lagos route to be very vigilant when they want to board aÂ  vehicle.

Explaining how he was kidnapped, Pedro said the driver of the vehicle he boarded fromÂ  Ijebu-OdeÂ  pretended he was going to Lagos and told him the transport fare was N100 whichÂ  he thought was cheap not knowing it was a bait.

He said the private car driver drove him and other passengers to the ritualistsâ€™ denÂ  inside a bush on the Lagos-Ibadan expressway just after descending the overhead bridgeÂ  linking Abeokuta with Ibadan.

â€œI was going back to school in Lagos and while waiting at the Shagamu express roadÂ  junction, a red Volkswagen Gulf car stopped with two occupants wearing white garment.

â€œWhen the driver told me he was going to Lagos and the fare was N100, three of usÂ  scrambled to enter the vehicle.

â€œBut on the way, the driver suddenly veered into a bush path and when we protested, heÂ  told us he was trying to avoid traffic jam in Mowe and we believed him,â€ Pedro recounted.

â€œAs we went deeper into the bush, the driver suddenly stopped beside a makeshift hut andÂ  two huge men came out armed with guns.

â€œThey ordered us to alight and started mocking us, saying this was Lagos and that we wereÂ  already dead.â€

Pedro said they were ordered to remove their clothes while they wet their bodies withÂ  water and started flogging them.

â€œWe were beaten until one of us collapsed and died.

â€œWe were dispossessed of our belongings and they told us we would be sacrificed by 12Â  midnight.

â€œBut at 8 p.m that night, the ring leader suddenly pointed at me and asked me to get upÂ  and leave the place because I had a stubborn spirit.

â€œHe directed one of his aides to return my belongings and escorted me to a place. FromÂ  there I was able to trek to Mowe town before I could getÂ  assistance and got back toÂ  Shagamu,â€ he said, appealing to the Ogun State Police Command to intensify patrol aroundÂ  the area.