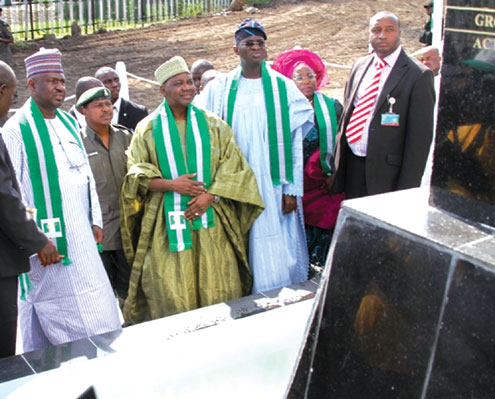 Ahead of Nigeriaâ€™s 50th Independence Anniversary, the Vice President, Architect NamadiÂ  Sambo, Sunday in Lagos said with the nationalist moves of President Goodluck Jonathan,Â  and the monumental achievements being recorded in Lagos, Nigeriaâ€™s future is assured.

Vice President Sambo who spoke at the Tafawa Balewa Square, Lagos while commissioning theÂ  Independence Tower built in honour of the Founding Fathers of Independent Nigeria, saidÂ  with what is happening in Lagos and the commitment of President Goodluck Jonathan towardsÂ  the upliftment of the nation, Nigerians should look forward to a brighter future.

Urging Nigerians not to give up on the country, Sambo declared, â€œFrom the demonstrationsÂ  we see in Lagos and the commitment of the President, Dr. Goodluck Ebele Jonathan, thereÂ  is hope for Nigeriaâ€, adding that it showed that the youth were prepared to giveÂ  responsible leadership to the country.

â€œAlthough we are not yet there, I want to assure all Nigerians that we shall make all theÂ  necessary efforts to put Nigeria back on the path of honour as laid by our greatÂ  leadersâ€, the Vice President said.

He paid glowing tributes to the Founding fathers â€“Dr. Nnamdi Azikiwe, Chief ObafemiÂ  Awolowo, Alhaji Ahmadu Bello and Alhaji Abubakar Tafawa Balewa as well as others forÂ  their great contributions and sacrifice to deliver an Independent Nigeria to succeedingÂ  generations.

â€œI am greatly delighted to stand on this great historic spot where the Union Jack wasÂ  lowered 50 years ago and the Nigerian Green White Green Flag of Independence was firstÂ  hoistedâ€, Sambo said, pointing out that the names and images engraved on the 18 metreÂ  tower were by no means exhaustive of all those who fought for Nigeriaâ€™s Independence.

The Vice President thanked the Governor of Lagos State, Mr. Babatunde Fashola (SAN) forÂ  the role he played in seeing to the completion of the project â€œin record timeâ€, notingÂ  that the tower was actually constructed in 26 days.

â€œThis is a demonstration of the harmonious inter-governmental relationship existingÂ  between the State and the Federal Government,â€ he said.

Earlier, in his welcome address, Governor Fashola expressed confidence in the future ofÂ  Nigeria pointing out that at 50, the country was now in a better position to take itsÂ  proper place in the comity of nations.

He said the commissioning of the Independence Tower in Lagos which, according to him,Â  signals the beginning of the celebration of the countryâ€™s 50th Independence Anniversary,Â  was only fit and proper because the history of Independent Nigeria started in Lagos.

Describing Lagos as â€œthe Sourceâ€, Governor Fashola declared, â€œWe are gathered here toÂ  begin our celebration of 50 years of Nigeriaâ€™s Independence. It is only fit and properÂ  that it starts from here because the Union Jack was lowered here 50 years ago to declareÂ  Nigeriaâ€™s freedomâ€.

â€œWe are being united with history today because what we are doing today is to commemorateÂ  the ceremonies that ushered in our freedom. This monument (Independence Tower) containsÂ  those who made us free. It is true that they worked very hard to hand over to us a freeÂ  and fair countryâ€, the Governor said, adding, â€œAs we start the celebrations from here, IÂ  have the hope that Nigeriaâ€™s future is greaterâ€.

The Vice President had earlier paid a courtesy call on the Oba of Lagos, His RoyalÂ  Majesty, Oba Rilwan Babatunde Akiolu 1, where he promised that he would review the issuesÂ  concerning the properties belonging to the State which are still in the hands of theÂ  Federal Government and its agencies.

The Vice President, who was responding to Oba Akioluâ€™s welcome address, said the presentÂ  administration led by President Goodluck Jonathan, â€œdoes not discriminate against anyÂ  Nigerianâ€ adding, â€œWe have sworn to be fair and just to all Nigeriansâ€.

He requested that all the issues raised by the Monarch should be documented and sent toÂ  him, promising that he would personally handle all the issues and ensure that they areÂ  resolved once and for all.

He told the Oba, â€œI am here in Lagos to kick-start one of the items of the celebration ofÂ  our 50th Independence. I have come to obtain your blessing and to show appreciation forÂ  your continued contribution to the development of Lagos State and Nigeria. Allah willÂ  uphold you so that you will continue to assist in the development of our countryâ€.

In his welcome address, Oba Akiolu 1, had raised the issue of land and other propertiesÂ  belonging to Lagos State but which are yet to be released to it by the FederalÂ  Government. Such lands and properties include, the Obalende Central Mosque in DodanÂ  Barracks, the Tafawa Balewa Square, Lagos International Trade Fair Complex and theÂ  Federal Secretariat among others.

Oba Akiolu appealed to the Vice President to impress it on the President Jonathan toÂ  redress the issue which, according to him, has been very disturbing to the people ofÂ  Lagos State adding that the people have chosen the part of peace believing that justiceÂ  would prevail.

Present at the commissioning ceremony were the Secretary to the Government of theÂ  Federation, Alhaji Yayale Ahmed and some members of the Federal Executive Council, theÂ  Lagos State Deputy Governor, Princess Sarah Sosan, the Secretary to the Lagos StateÂ  Government, Princess Adenrele Adeniran Ogunsanya, members of the State Executive CouncilÂ  and other top government functionaries.

In attendance at the Palace of the Oba of Lagos were Chief Molade Okoya-Thomas, SenatorÂ  H.A.B. Fashinro, other traditional rulers, some members of the Federal and StateÂ  Executive Councils and other top Government functionaries.