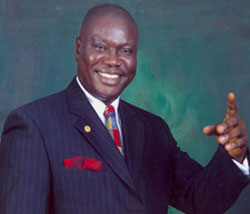 Ahead of the general elections next year, Speaker of the Lagos State House of Assembly,Â  Adeyemi Ikuforiji, has said he has not made up his mind about which office so seekÂ  election as he was waiting on his party, the Action Congress of Nigeria, ACN.

Ikuforiji, who spoke in his office yesterday afternoon, said that though he has chosen toÂ  remain in active politics, he would not contest for any office except the party gave himÂ  a go-ahead.

Asked if he was gunning for the governorship of the state as is widely speculated, theÂ  Speaker said: â€œYou all know that I am a party man and I am not a man to declare intentionÂ  before my party gives the nod for such action.

â€œIt is wrong and not the best to do for anyone to jump outside the partyâ€™s directive. IÂ  am occupying the office of the speaker and as the chief lawmaker of the state, I shouldÂ  not be seen to break laws.

â€œI cannot break the laws of the party to declare any intention.â€

Ikuforiji said people have asked him several times on his ambition and that he hadÂ  constantly told them he cannot take a decision without the nod of the party.

â€œYes, as the Speaker of the House, the sky is the limit. I have chosen to remain inÂ  active politics and I have the right to contest for any position from the councillorshipÂ  of my ward to the president of this nation, but I cannot do that unless I am presented byÂ  the political party.

â€œI am not yet ready to say anything about the future because my party has a major stakeÂ  in that.

â€œIf the party says the office of the speaker is not yet vacant, it would be funny andÂ  stupid for any member of the party to say he wants to come back to the House and becomeÂ  the speaker,â€ Ikuforiji said.

He however lamented that the Federal Government was spending a huge sum on the 50thÂ  independence anniversary when the country was highly challenged in infrastructure.

He specifically mentioned the Benin-Ore road which has become an eyesore, saying part ofÂ  the money should have been used to fix it.