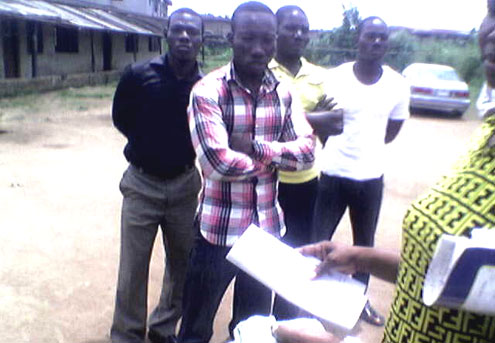 The brothers, Peter Eboka, 30, Chuks Eboka, 28, Emeka Eboka 26 and 22-year-old Ejike Eboka were alleged to have raped the victims (names withheld) aged six and seven years. The are the daughters of their neighbour.

They knew that all of them were involved in the same act when the matter blew open. They were alleged to have had sex with the victims at various times and warned them not to tell anyone about it.

The incident happened at Olorunfemi area of Igando, Lagos, South-West Nigeria where both the defendants and the family of the victims reside.

The matter, however came to the open when the mother of the victims discovered that her daughters were no more walking properly and on checking their private parts, she discovered that they had wounds and bruises.

It was then that the mother asked them who had been assaulting them sexually. They told her it was the defendants that usually took them into their apartments and had sex with them.

According to their mother, Blessing (surname withheld) she went to report the matter at Igando Police Station and the police advised her to take the little girls to the Alimosho General Hospital at Igando for check up.

The checks conducted on them showed that they had contracted a sexually transmitted disease as a result of the rape.

The four brothers were arrested and charged to court on a four-count charge of defilement, unlawful carnal knowledge and threat to lives of the victims.

They pleaded not guilty to the charge. The Magistrate, Mrs. S. O. Solebo granted them bail in the sum of N200,000 with one responsible surety.

The court also ordered that the surety must deposit N225,000 into the Chief Registrarâ€™s account each and must be gainfully employed.

The matter has been adjourned till 25 October, 2010 while the defendants were remanded in prison custody at Kirikiri, Apapa, pending when they meet their bail conditions.