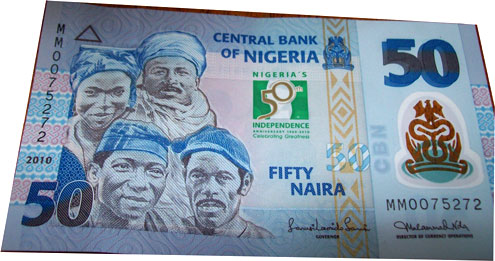 This was announced at the Federal Executive Council meeting this morning by PresidentÂ  Goodluck Jonathan who also ordered the Minister of Interior, Captain Iheanacho to make aÂ  formal announcement of the holiday to Nigerians. This was one of the highlights ofÂ  todayâ€™s FEC meeting which lasted only 48 minutes.

Lamido Sanusi, the Governor of the Central Bank of Nigeria, who presented the notes andÂ  the coins to President Jonathan for launching, said the redesigned N50 note willÂ  circulate along the existing one.

The redesigned note has the anniversary logo, a strip of gold band and a varnishedÂ  message that reads: 1960-2010, 50th Independence, which can be seen when the currency isÂ  tilted.

Meanwhile, President Jonathan departed Abuja for Lagos to review the fleet of theÂ  Nigerian Navy immediately after the FEC meeting which started promptly at 10am.

October 1, the date Nigeria got its independence from Britain, will be heralded withÂ  fireworks, Yayale Ahmed, Secretary to the Government of the Federation, SGF announced atÂ  the FEC meeting this morning while outlining some of the programmes scheduled to markÂ  Nigeriaâ€™s 50th independence anniversary.

The President will host a banquet for distinguished Nigerians in Abuja tomorrow where 50Â  important personalities, including a number of deceased and living Nigeriaâ€™s foundingÂ  fathers will be honoured with medal. The President is also scheduled to hold anotherÂ  banquet in Lagos on 2 October.

The grand finale of the event will be the parade at Eagle Square on Friday which willÂ  feature military parade, parade of Nigeriaâ€™s military hardware, callisthenic displays andÂ  maneuvers by jets of the Air Force which will be flown direct into Abuja from Makurdi onÂ  that day.

Meanwhile, the city of Abuja is already agog for the celebration of the independenceÂ  anniversary as the roads are being decorated while rehearsals have continued at the EagleÂ  Square for the Friday grand event.