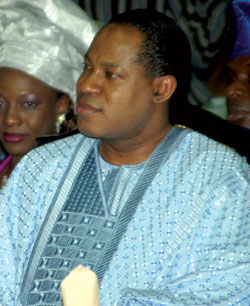 Barrister Cobham made the comment Wednesday night while flagging-off the 2010 ReachoutÂ  Nigeria Rhapsody of Realities campaign at the Christ Embassy Church , Calabar.

He said the 2010 campaign was significant because it coincides with the 50th anniversaryÂ  of Nigeria â€™s Independence . â€œIn the past fifty years we have seen quite a lot, a lot ofÂ  opportunities some lost, some utilized and during this time we have sen the rsie of a manÂ  of God in the person of Pastor Chris Oyakhilome who is a worthy role model for ourÂ  generation.â€

Barrister Cobham described the Reachout campaign as a silent but effective revolutionÂ  that is changing the mindset of Nigerians â€œTo change a man is to change his mindset andÂ  Pastor Chris has chosen this mediumÂ  to change the mindset of Nigerians and I am one ofÂ  those who believe along with him that weÂ  make this country truly great which is the theÂ  image of God for usâ€.

He called on Nigerians to take a critical look at themselves as the only way to attainÂ  greatness is toÂ  believe and take pride in the strides and prospects of the nation.

He said the Reachout Nigeria campaign has touched the lives of many and thanked God forÂ  giving Nigeria such a peson.

Pastor Marcel Obode, the Senior pastor of Christ Embassy Calabar said the ReachoutÂ  campaign started a few years ago byÂ  the ministry as a medium to touch the life ofÂ  everyone in Nigeria and beyond.Â  â€œWe may have been faced with a lot of challenges as aÂ  nation and may not have voted to be amalgamated, but now that we are one nation God wantsÂ  us to live together and and be a great nation.â€