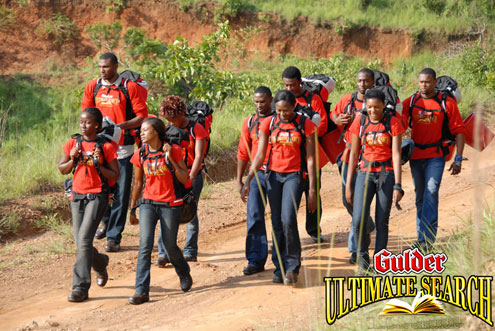 For the next 21 days, millions of television viewers across Nigeria and Africa will beÂ  treated to exciting moments of adventure, fun and suspense as the seventh edition of theÂ  hit television reality show, Gulder Ultimate Search, GUS, hits the screen from Saturday.

Already, 12 young, strong and able-bodied Nigerians are in the Omo Forest Reserve in AreaÂ  J4, Ijebu East Local Government Area of Ogun State where they will slug it out for theÂ  honour of becoming an â€˜Ultimate Heroâ€™.

The contestantsâ€“an equal mix of six young men and ladiesâ€“emerged successful from tens ofÂ  thousands of youth that participated in gruelling auditions held across the country.

There are additional two contenders-a male and female-which was a departure from theÂ  usual 10 contestants in the previous series of the show.

They were unveiled on Saturday 18 September, 2010 at a selection party held at the LagoonÂ  Restaurant, Victoria Island, Lagos.

Explaining the rationale for the inclusion of the extra two contenders unlike previousÂ  editions of the show, Ageni Yusuf, Corporate Affairs Adviser, Nigerian Breweries plc,Â  sponsors of the show said it isÂ  in the spirit of the 40th anniversary of the GulderÂ  brand in Nigeria and the ongoing Golden jubilee anniversary of the country..

Yusuf added that the 12 men and women have already entered the forest so dense evenÂ  sunlight struggles to permeate.

The last man standing in this yearâ€™s search will go home with a cash prize of N7 million,Â  aÂ  SUV worth N10 million and N500,000 forÂ  wardrobeÂ  allowance.

Others will go home with consolation cash prizes ranging from N350, 000 and N2.5 million,Â  depending on the length of their participation in the search. In the event of a woman notÂ  emerging the winner, the â€˜Last Woman Standingâ€™ gets an additional N1million.