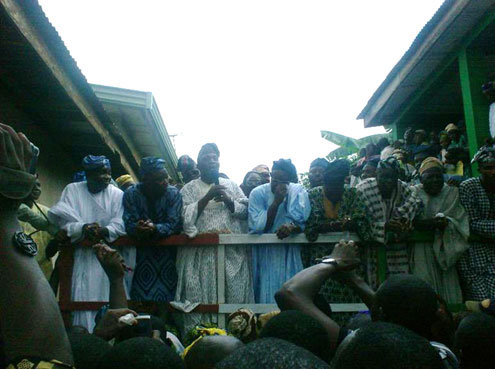 Yekinni Adeojo, Chairman of Implementation Committee, Yinus Akintunde, eight lawmakers sacked by the Speaker of the House of Assembly and Honourable Morof Atilola also joined those who opened the new parallel secretariatÂ today at Gbagi Area of Ibadan.

All those who officially opened the party secretariat at a rally this afternoonÂ are opposed to the stateÂ governor Adebayo Alao-Akala.

The opening of the new secretariat may not be unconnected with the failure of the party at the national level to resolve the protracted crisis rocking the party in the state.

Speaking at the rally, Senator Ladoja assured his teeming supporters that come 2011, he is returning to the state as the governor.
He saidÂ arrangements had been concluded on how to send Governor Adeayo Alao-Akala out of Government House.

He described Akala as a betrayerl who is worse than satan.
Also speaking at the rally, Akintunde allayed the fears of party members that have not been registered by the party, stressing that there are enough forms to register anybody that wants to be a member of the party.
According to him, over one million forms have been given to him by the national body of the party, adding that after everyone has been registered, the party’s primary would be conducted for the aspirants into variousÂ political offices.
Addressing newsmen, Senator Balogun disclosed that the party already has its governorship candidate, stressing that at the appointed time, the right candidate would be revealed.
He said that Akala cannot be allowed to run forÂ  the third time, saying that his first time was his 11-month illegal administration while the second term is his term that would end inÂ 2011.
Balogun stated that the reign of Akala has been characterized by mal-administration and corruption, adding that Akala paralysed all the sectors in the state.
â€œTell me, who is not suffering in the state? Teachers are suffering because they are yet to collect their salaries based on 27.5 percent approved by all the governors of all the states in the country,” he said,Â alleging that even the projects executed by Akala were used to siphon public money.
Clarifying that the crisis in PDP cannot make the party lose the forthcoming election Oyelese said that people want PDP in the state but they donâ€™t want Akala stressing, â€œPeople of the state want PDP. It is Akala that they donâ€™t want and once we settle our problems, all the legitimate PDP including those sojourning with Akala will cross to our side and we will deliver the state for PDPâ€.
A former Special Assistant to Akala, Abass Oloko, described him as a dictatorial governor who does not listen to members of his cabinet.
Oloko said that Akala does not listen toÂ members of his cabinet, including theÂ Chief of Staff, Dr. Saka Balogun, adding that sending Akala out of office is good riddance to bad rubbish.

Reacting to Ladojaâ€™s intention to contest the governorship poll, Governor Akala said, â€œThe news that Senator Ladoja is planning to contest the governorship race in Oyo State is welcomed just as we wish him many happy returns on his birthday. His informal declaration, however, can only attract the opposite of what he intended because he gratuitously frittered away his goodwill by failing to perform during his crisis-ridden tenure.â€

He added: â€œNow he has political value but his electoral value has unfortunately diminished so embarrassingly. In the unlikely event that he chooses to test the waters in the PDP, a party he has derided ever so often, his fate is awaiting him and if he chooses the party of his co-adventurers, he couldnâ€™t fare betterâ€.