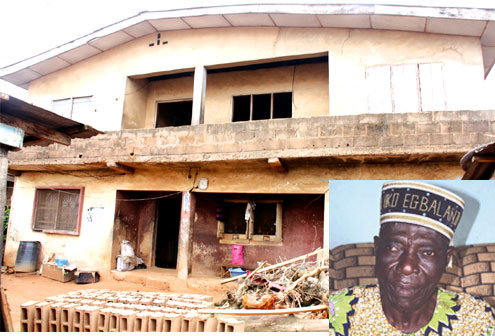 A 74-year old landlord in Ifako-Ijaye area of Lagos State, South West Nigeria, has givenÂ  his 28 tenants one month free rent in celebration of the 50th Independence anniversary ofÂ  Nigeria.

The landlord, Chief Sikiru Oladunjoye, told his tenants to not to pay the rent forÂ  September, , saying that he had used it as gift for them to celebrate the golden jubileeÂ  of Nigeria.

All the tenants sang praises of the landlord of the house situated on 5 OladunjoyeÂ  Street, Toyin bus stop, Iju-Ishaga.

Oladunjoye is the Baale of Obada-oko in Ewekoro Local Government Area of Ogun State. HeÂ  came to Lagos State in search of greener pastures in 1957 as a mechanic.

There are lots of reasons to give thanks to God, especially as he weathered the storm toÂ  actualise his mission in Lagos.

â€œThe gesture is the least I could do to appreciate God and the country. The 50thÂ  anniversary celebration is significant in my life because I married my senior wife onÂ  September 30, 1960 and we celebrated the Independence Day together as couple. I rememberÂ  quite well that the celebration was our first social engagement as I recall taking herÂ  round Lagos to behold fiery fireworks,â€ he recollected.

However, Oladunjoye said he was also moved by the many achievements of Governor BabatundeÂ  Fashola, saying that â€œhonestly, I donâ€™t know where this kind of a man has been all theÂ  while. We have suffered in Lagos as a commoner. Look at all the selfless services he andÂ  his cabinet have been rendering. May God never cease His blessings on him.â€

He again prayed for President Goodluck Jonathan and his team for successfulÂ  administration and the 2011 election, saying, â€œas a Muslim, I am always philosophical andÂ  cautious when I approach issues. Jonathanâ€™s emergence in the political scene of thisÂ  country is mysterious. The earlier we admit this, the better for us all.

â€œGod may have brought him to come and wipe our tears away after all punishment meted outÂ  to us by our past leaders. I want us all to rally round him, bless and support him. IfÂ  possible let us contribute our quota towards his success at the polls.â€

â€œOne of the tenants, Augustin Edewor, a police sergeant said he was not surprisedÂ  â€œbecause Baba is known for good gesturesâ€ and prayed that God favours him and his family.

Another tenant, Najeemdeed Sobola, a welder, described the landlordâ€™s gesture as anotherÂ  positive deed he is known for in the area.

When contacted, the landlord said some of the tenants still remained sceptical about hisÂ  decision to give them the bonus.

He said he had a lot of harrowing experience from landlords in the state, which made himÂ  resolve to treat his own tenants well.