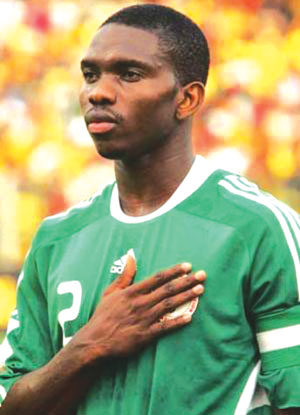 In the wake of Nigeriaâ€™s suspension from international football, Super Eaglesâ€™ captain,Â  Joseph Yobo, has made a passionate plea to warring factions in the countryâ€™s football toÂ  sheathe their swords and embrace peace.

Yesterday, FIFA slammed an indefinite suspension on the Nigeria Football Federation (NFF)Â  due to government interference, after becoming frustrated with events in the West AfricanÂ  country.

And this latest setback has left the Nigerian captain seeking an everlasting resolutionÂ  to the crisis that has dogged the country since the teamâ€™s elimination in the first roundÂ  of the World Cup in South Africa in June.

â€œThe players are gradually coming to camp in preparation for the Guinea game when theÂ  news broke; itâ€™s a sad one for the players.â€ Yobo said.

â€œWe just hope everyone canÂ  come together and resolve this crisis once and for all forÂ  the progress of the country.

â€œThe players are relatively calm hoping things can quickly be resolved because aÂ  suspension preventing the game on Sunday would have negative effect.

â€œFootball brings us together as a country; we should not let it separate us as a strongÂ  nation.

â€œAfter the World Cup disappointment, we are gradually making effort to usher in a new joyÂ  and happiness and this FIFA suspension is the last thing we need.â€

The world governing body said the suspension follows a bid by Nigeriaâ€™s sports minister,Â  Ibrahim Bio, to restart the league without relegation from the previous season.

The decision by the National Sports Commission (NSC) to force the NFF secretary-general,Â  Musa Amadu, to stand down from his position did not also go down well with FIFA.

A court action barring the newly-elected members of the NFF also drew the ire of theÂ  world governing body. The NFF board led by Aminu Maigari has not been able to operateÂ  because a Federal High Court sitting in Lagos ruled that the elections of 26 August thatÂ  brought him to power were null and void.