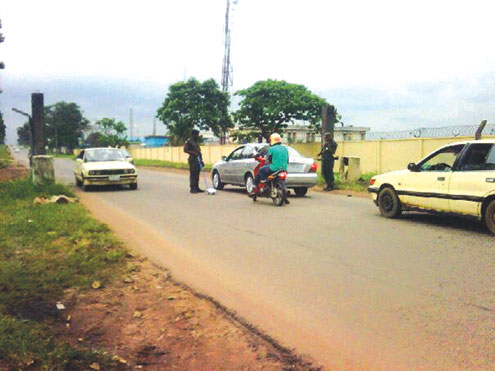 â€¢Officers of the Bomb Disposal Unit of the Nigeria Airforce frisking motorists and other visitors to the Murtala Muhammed International Airport, Lagos, yesterday. PHOTO: SIMON ATEBA.

Following the 1 October bomb blasts that killed at least 10 persons and injured 30 inÂ  Abuja, Nigeriaâ€™s capital, during the 50th independence anniversary celebration, securityÂ  has been beefed up nationwide.

According to reports by P.M.NEWS correspondents, security has been tightened at strategicÂ  locations, especially in the state capitals and other big towns across the country.

Security was tight this morning within and around the Murtala Muhammed InternationalÂ  Airport, Lagos. All the vehicles moving towards the aerodrome were stopped and searchedÂ  thoroughly by a combined team of the Air Force personnel and the Lagos Airport PoliceÂ  Command.

The security operatives used anit-bomb detector devices and conducted body search on allÂ  the commuters. A reinforced team of policemen could be seen at the terminal building ofÂ  MMIA. Metal detectors were used, personal belongings were opened and searched. TheÂ  exercise caused heavy traffic jam on the road to the airport.

Security has also been beefed up in and around Abuja as a result of the insecurityÂ  engendered by the Independence Day bomb blasts.Â  Visitors to the Three Arms zone whichÂ  houses the Presidential Villa, the Supreme Court and the National Assembly, areÂ  thoroughly screened by men of the State Security Service, who demand for identity cardsÂ  or documents to prove that anybody who wants to access the area has a genuine business toÂ  do there.

Those who want to gain access to buildings housing different ministries and agencies areÂ  also asked toÂ  show proof why they are there, while those who cannot prove that they haveÂ  genuine business are turned back.

The section of the Shehu Shagari Way where the October 1 bomb blasts occurred remainedÂ  cordoned off at the time of filing this report this morning.Â  This led to heavy trafficÂ Â  build up in the alternative routes.

Also, shuttle buses which used to take those who want to go into the National AssemblyÂ  complexÂ  have been banned as a result of the heightened state of insecurity. There wasÂ  heavy security presence at all the entrances to the complex yesterday as vehicles andÂ  visitors going to the complex were searched by officials of SSS and the police.

Also, policemen have been deployed to the Nnamdi Azikiwe International AirportÂ  whereÂ  they are subjecting travellers to thorough checks before allowing them into the facility.Â  Boots of cars goingÂ  into the airport are checked.

Police officers have also been deployed to major hotels like the Transcorp Hilton.Â  Vehicles going into the hotels are now screened and searched unlike before when there wasÂ  easy access for those who go there.

From Jos, Plateau State, our correspondent reports that the presence of heavily armedÂ  policemen and soldiers was noticeable at strategic locations in the state capital sinceÂ  the Abuja bomb blasts occurred.

According to Lawan, the command had been instructed to beef up security which it plans toÂ  do from tomorrow. He added that Kaduna and Plateau which were regarded as volatile statesÂ  have been asked to be on red alert.

At the Calabar Airport, security was beefed up by operatives in plain clothes. After theÂ  bomb blasts occurred in Abuja last Friday, sources at the airport said the number ofÂ  travellers had reduced drastically. Fewer flights are now recorded as only a few peopleÂ  now buy flight tickets.

Head of the security at the Aiport confirmed to P.M.NEWS this morning that the number ofÂ  policemen deployed there has been increased. However, the situation has remained calm inÂ  the metropolis as the security was not in anyway threatened while people go about theirÂ  normal businesses without any form of security threat or molestation.

From across the city of Enugu, investigations revealed that all the security agents haveÂ  taken over strategic locations in the state capital.

Both plain clothes andÂ  uniformed policemen with other security operatives have beenÂ  deployed to strategic locations in the coal city. However, there has been no threat toÂ  security as at press time when P.M.NEWS went round the city.

The security situation in Ilorin, the Kwara State capital, this morning was normal. ButÂ  the police have increased patrol and surveillance within and outside the city, especiallyÂ  in strategic areas. With the peaceful atmosphere, residents of Ilorin and environs wereÂ  seen going about their normal business activities.

In Kano, security has been tightened with joint patrol of the police and Army and otherÂ  security agents.

Fully armed policemen and bomb disposal squad were also seen in all parts of the city.

The Kano State Commissioner of Police, CP Mohammed Gana told P.M.NEWS on telephone thisÂ  morning that the police in the state are ready for any threat to peace and security inÂ  the state.

Gana said part of the measure to ensure security of life and property, is a securityÂ  meeting the state governor will have later today with all security agencies.

He urged residents of the city to go about their legitimate businesses without any fear.

Meanwhile, the Abuja bomb incident is still being discussed among citizens in the state.Â  Most people now avoid political gatherings as they live in apprehension in the wake ofÂ  the Abuja bomb blasts. Southerners in the state who spoke to P.M.NEWS on condition ofÂ  anonymity confirmed that they received panic telephone calls from the south asking afterÂ  their safety as Kano is known for its volatility in times of crisis.

Port Harcourt, the Rivers State capital was calm and quiet this morning. The regularÂ  police patrol continued in many parts of the city.

According to the Public Relations officer of the 2nd Amphibious Brigade, Boni Camp, PortÂ  Harcourt, Major Aminu Illiasu, there has been no incident in the Garden City to warrantÂ  soldiersâ€™ involvement in security operation.

Similarly, the spokesperson of the military Joint Task Force in the Niger Delta, ColonelÂ  Timothy Antigha told P.M.NEWS this morning that there was nothing to suggest militaryÂ  build-up in the region.

When P.M.NEWS visited the Nigerian National Petroleum Corporation, NNPC, the Central BankÂ  of Nigeria, CBN, only regular policemen were seen keeping guard at the offices.