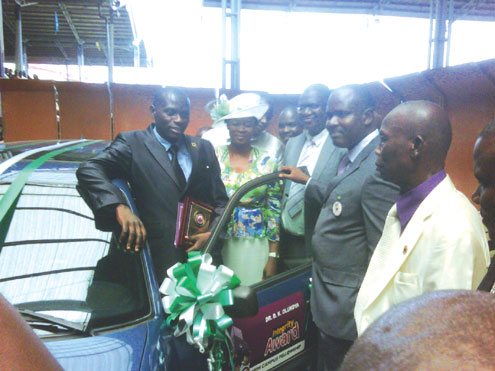 â€¢Durojaye Adeyemi Job, the honest student standing by the new car presented to him by Dr. D.K. Olukoya, General-Overseer, Mountain of Fire and Miracles Ministries. With him is the GOâ€™s wife, Sade and other top ministers of the church.

The General Overseer of the Mountain of Fire and Miracles Ministries, MFM, Dr. DanielÂ  Olukoya,Â  has presented a brand new Toyota Corolla car,Â  an undisclosed amount of moneyÂ  and a certificate of honesty to the Polytechnic student, Durojaye Adeyemi Job, whoÂ  returnedÂ  N9.3 billionÂ  wrongly credited to his First Bank Plc account.

Adeyemi, a Higher National Diploma, HND, student of Civil Engineering, The Polytechnic,Â  Ibadan, displayed an exemplary feat of honesty two months ago in Ibadan, while using theÂ  Automated Teller Machine(ATM) to withdraw N2000 from the N3000 in hisÂ  First BankÂ  account, he discovered a whopping N9.3billion balance in the account.

Unlike what most people will do especially in these hard times, Adeyemi, who is a youthÂ  cordinator in MFM Ibadan, after confirming that the money was real, decided to return theÂ  money to the bank.

The manager of the bank initially could not believe Adeyemi’s claim until she checked andÂ  discovered that the huge sum had been wrongly posted to his account from the bank’sÂ  headquarters in Lagos.

Announcing the car gift and other prizes to Adeyemi at the church’sÂ  monthly Power MustÂ  Change Hands programme lastweekend, Dr. D.K. Olukoya said the church decided to rewardÂ  him to show people that intergrity and honest still pay.

He noted that Adeyemi’s action has portrayed him as a good ambassador of the churchâ€™sÂ  emphasis on holiness.

Other items presented to him include an undisclosedÂ  special package in a briefcase and aÂ  plaque.

Following Adeyemi’s exemplary action in August, the Oyo State Goverment andÂ  his schoolÂ  authorities have also given him special award and gifts.

The authorities of The Polytechnic, Ibadan gave him a scholarship covering his schoolÂ  fees for the duration of his programme.

The school authorities also promised him a job on graduation. The institution’s PublicÂ  Relations Officer, Alhaji Adewole Soladoye, said the institution would do everythingÂ  possible to encourage honesty.

Ayo Makanjuola Josiah, Oyo State commissioner for Youth and Development, during the awardÂ  noted that no reward can be too much for honesty and integrity.

Job’s honesty has also been lauded by his lecturers and some students who described himÂ  as humble, brilliant and a disciplined person.