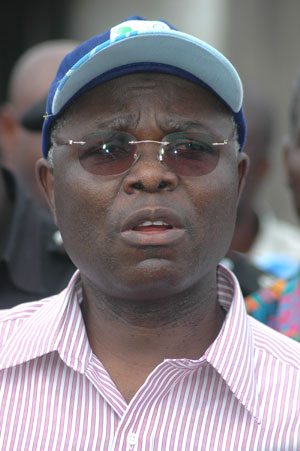 The news that Nigeria has been banned by FIFA was received by the Super Eagles playersÂ  preparing for this weekendâ€™s 2012 Nations Cup qualifier in Guinea with great shock.

The players at the Abuja camp are yet to come to terms with Mondayâ€™s ban imposed onÂ  Nigeria by world soccer governing body the FIFA.

FIFA on Monday announced that Nigeria has been suspended from all levels of the gameÂ  until the countryâ€™s government desists from interfering with the way football is run inÂ  Nigeria.

The ban means Nigeria will forfeit Sundayâ€™s Nations Cup qualifier unless the governmentÂ  agrees to the terms put to it by FIFA.

FIFA on Monday announced that Nigeria has been suspended from all levels of the gameÂ  until the countryâ€™s government desists from interfering with the way football is run inÂ  Nigeria.

The ban means Nigeria will forfeit Sundayâ€™s Nations Cup qualifier unless the governmentÂ  agrees to the terms put to it by FIFA.

â€œI am actually shocked to hear this and also short of words. I am disturbed because rightÂ  now we are working so hard to give a very good account of ourselves in Guinea,â€ HeartlandÂ  defender Ikechukwu ThankGod told MTNFootball.com.

â€œBut now we donâ€™t even know if we will go to Guinea anymore to play the match. It is soÂ  sad and worrisome. This will surely have adverse effect on Nigerian football.

â€œDoes that mean it is only the Nigerian Premier League we will be playing?â€

Equally perplexed was Bayelsa United goalkeeper Bassey Akpan, who along with other NPLÂ  stars have been training in Abuja since last week preparatory to the match in Conakry.

â€œAs soon as we heard the news we were all shocked and we donâ€™t even know what will becomeÂ  of us as a result of this shock pronouncement from FIFA,â€ Akpan told MTNFootball.com .

â€œThis is a bad 50th Independence anniversary gift from FIFA. This will surely affect usÂ  all as Nigerian players.

â€œIt will also affect those of us in Europe and other parts of the world. For instance, itÂ  is in the condition of contract given to any foreign player in the English Premier LeagueÂ  to always meet up with the 75 percent appearance with his national team.

â€œSo, that means that Nigerian players there would suffer and may lose their jobs if theyÂ  are now deprived of featuring for their country.â€

â€œIt is a sad situation. It is very sad. Does that mean Guinea will pocket the threeÂ  points without kicking any ball? Are we out of the Nations Cup race?â€

â€œPresident Jonathan should intervene now before it is too late. I know with hisÂ  intervention everything would be settled amicably in the interest of football in theÂ  country,â€ pleaded an emotional Akpan.

â€œHe is our father and I believe he wonâ€™t watch us his children to suffer and to be thrownÂ  into the labour market just like that with all the talents that God has blessed us.â€

Meanwhile, aÂ  member of the former board of the Nigeria Football Federation (NFF), ChrisÂ  Green, has singled out the Sports Minister Isa Bio for blame following the recentÂ  decision of Fifa to suspend Nigeria from all competitive football.

Green told SuperSport.com that Bio and the director general of the National SportsÂ  Commission must take responsibility for the current low in Nigerian football.

â€œBoth men are responsible for this. They were adamant in arbitrarily installing certainÂ  persons into the board of the federation. In the process they violated article 13 of theÂ  Fifa statutes, as it has to do with external interference in the running of football byÂ  an affiliate member.â€

The football chief, who was a former commissioner for sports in Rivers State, furtherÂ  disclosed that football in Nigeria will suffer immensely in the coming days unless rapidÂ  steps are taken to correct the situation.

â€œI fear for our youth. All our male and female national teams, clubs and youth sides haveÂ  automatically sacrificed their positions at regional, continental and global meets due toÂ  the selfishness of two inviduals. Nigeria as a nation was not compelled to become aÂ  member of Fifa in 1945. When you decide to become an affiliate of an association likeÂ  Fifa, you have to realise that its laws, rules, regulations, acts and statutes areÂ  binding on you. Unfortunately, both Patrick Ekeji and Isa Bio did not think of thisâ€ heÂ  said.