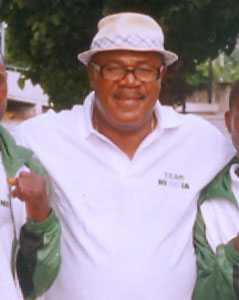 Chief Coach of Nigeriaâ€™s boxing team atÂ  the ongoing Commonwealth Games in India,Â  America-based Idika Nsofor, before departing for the GamesÂ  told ADEBOBOLA ALAWODE thatÂ  the five boxers that would compete at the event wonâ€™t disappoint the nation.

Finally the D-day is here and the team are about leaving, what should Nigerians expectÂ  from them?
Well, the die is cast while the stage is set. The five boxers as you can see are in highÂ  spirits and raring to go. There is nothing I can promise Nigerians than to say we areÂ  going to give a good account of ourselves in India.

How prepared are the boxers for the Games?
They are well prepared. We have been in camp for months and with the level of trainingÂ  that they have received, I donâ€™t see any boxer defeating them.

You sound so optimistic, why?
Yes, I repeat, no boxer can beat them or may be they will beat themselves if they meet.Â  Theyâ€™ve been prepared very well for the task. I can boldly beat my chest and say it isÂ  only the boxers that can beat themselves, because if they get into the ring and fail toÂ  listen to instructions, then anything can happen.

What do you mean by anything can happen?
What I meant is that when some boxers get into the ring they turn deaf ears to theÂ  instructions given to them, in that case anything can happen. But when a boxer listens toÂ  you and add his to technique, at the end of the day both of you would be smiling becauseÂ  he won the bout.

Donâ€™t you think your inability to embark on a European tour would affect the teamâ€™sÂ  performance in India?
I donâ€™t think that is an excuse for us not to do well in India. The boxers have what itÂ  takes to become world champions but it depends on their zeal to be who they want to be.

Are the boxers aware of the computer scoring technique now?
The computer scoring technique is what is obtainable all over the world. Iâ€™m based in theÂ  United States of America, USA, so Iâ€™m very much aware of how the scoring is done. I alsoÂ  took out time to keep the boxers abreast of it. They have been briefed about how itÂ  works, so we are not envisaging any problem.

Asia is far; donâ€™t you think the weather would be a challenge?
The weather wonâ€™t be affect us since we have conditioned the boxers. They wonâ€™t allow theÂ  weather to hinder them from clinching medals in India.

How supportive is the Nigeria Boxing Federation, NBF?
I must confess to you, the NBF did its best in terms of preparing us for the Games. WeÂ  never lacked anything in terms of encouragement.

Youâ€™ve been in the USA for a while how do you feel coming back home?
Itâ€™s good to be home. It is not easy returning home but I had to.

Why did you return home in the first place?
I came back home because Iâ€™m a patriot. IÂ  want to help develop boxing in Nigeria, that’sÂ  what I need to do now.