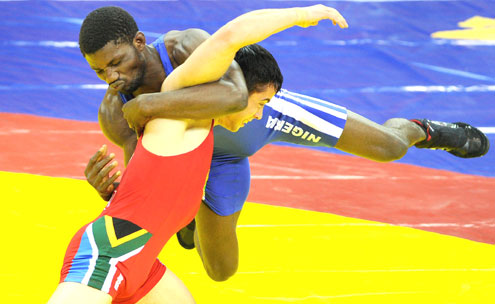 â€¢BRONZE EFFORT...Romeo Joseph of Nigeria (blue) wrestles with Marius Loot of South Africa on the way to winning the bronze medal in the 60kg category of the Greco-Roman Wrestling at the 2010 Commonwealth Games in New Delhi yesterday. PHOTO: AFP.

As Nigerian football battles to extricate itself from the crisis that led to a suspensionÂ  from international football by FIFA early this week, other sports are bringing fame andÂ  glory to the nation.

In far away India, venue of the 2010 Commowealth Games, Team Nigeria increased theirÂ  medal haul to three after schoolgirl, Augustina Nkem Nwaokolo won the first gold medal ofÂ  the Games for the country in the womenâ€™s 48kg weightlfiting event on Monday. YesterdayÂ  was a good day for Team Nigeria as Onyeka Azika won a silver medal in the womenâ€™s 53kgÂ  weightlifting event while Romeo Joseph won a bronze medal in the 60kg category of theÂ  Greco-Roman Wrestling.

However, Nigeriaâ€™s quest for a good performance in the boxing event of the Games got offÂ  to a shaky start yesterday as mouthy Ganiyu Muideen was stopped by Ghanaâ€™s LawsonÂ  Fredrick in the 64kg. But,Â  another Nigerian pugilist, Lukman Lawal defeatedÂ  a GreekÂ  boxer in another bout.

P.M.Sports gathered that president of Nigeria Boxing Federation, NBF Rotimi George-TaylorÂ  will today leave for to India to motivate the other boxers who are still in contention inÂ  the competition.