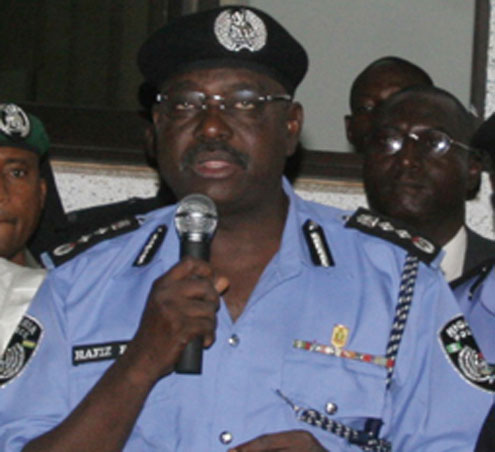 A 43-year old policeman,Â  Corporal Lanre Ramoni, attached to Agbara Divisional PoliceÂ  Headquarters in Ogun State, is currently being detained for having sex with his daughterÂ  for four years. He also aborted her pregnancy four times.

His daughter (name withheld), 19, is an SSS 3, student and the only child.

P.M.NEWS investigation revealed that Corporal Ramoni, has been having sex with hisÂ  daughter since she was 15 years old.

He even compelled her not to tell anyone about the illicit affair.

The cat was let out of the bag on Monday when the girl got to the school with bruises allÂ  over her body and when a classmate of hers asked her what happened, she opened up on whatÂ  transpired between her and her father.

P.M.NEWS further learnt that her classmate (Joke) on hearing this, ran to one of theÂ  teachers who later told the principal of the school about it.

Her father was invited to the school. On arrival, the girl confronted him right in theÂ  presence of the principal and the teachers.Â  She accused her father of having sex withÂ  her several times and also showed all the love messages he sent to her phone.

Two of the messages which were shown to P.M.NEWS read: â€œI love you so much, you are goodÂ  in bed than your mother,â€ and â€œHope you havenâ€™t told anybody that I am having sex withÂ  you?â€

The police authorities later waded into the matter by arresting the Corporal who is nowÂ  in detention.

Narrating her ordeal to P.M.NEWS, she said: â€œplease, brother, do not put my name in yourÂ  paper, my dad Corporal Lanre Ramoni, attached to Criminal Investigation Bureau, CIB,Â  Agbara police station has been having sex with me since when I was 15 years old and heÂ  made me swear to an oath. He told me if I revealed my relationship with him I would die.

â€œAnd I kept it to my chest until now that I am 19 years old. My dad sent my motherÂ  packing for no reason. Each time he wanted to make love to me, I always tell him â€˜Dad,Â  but you are my father you slept with my mother now it is my turn.â€™ I would cry but heÂ  always threatened to kill me. I aborted my pregnancy four times for him.

â€œSome times he would beat me when I refused but last Sunday, 3October, he wanted to sleepÂ  with me and when I didnâ€™t allow him, he beat me silly and that is why I have all theseÂ  bruises all over my body.

â€œWhen I go to school on Monday, my friend asked what caused the bruises and while I wasÂ  crying, I told her that I wonâ€™t talk because I would die. When she persisted I told herÂ  how my dad beat me because I refused to let him have sex that night with me. ImmediatelyÂ  I told my friend what happened, she ran and reported to the school authorities who sentÂ  for my Dad. And in the presence of everybody, I confessed and showed them the loveÂ  messages my dad sent into my phone. And Dad said yes it was true.â€

Ramoni admitted the allegation in his confessional statement to the police at AgbaraÂ  where he is being interrogated.