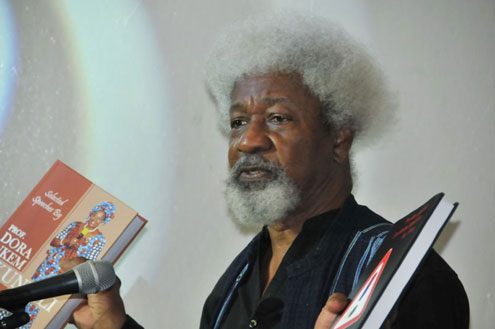 Prof. Wole Soyinka, Presenting the book, at the Presentation of the book ''War Against Counterfeit Medicine ''My Story'' and "Selected Speeches". By Prof. Dora Nkem Akunyili, at Transcorp Hilton, Abuja, on Thursday 07- 2010.

Peruvian novelist Mario Vargas Llosa, winner of this yearâ€™s Nobel Prize for literature,Â  likes books printed on paper and worries that something precious may be lost in an age ofÂ  ebooks and digitization.

â€œMy hope is that the new technology wonâ€™t mean a banalization of the contents of theÂ  book,â€ he said in New York Thursday.

The 74-year-old, a giant of Latin American literature who has combined a life of theÂ  imagination with engagement in the great political struggles of his time, was awarded theÂ  literature prize by the Swedish Academy which praised him as a â€œmoral conscience.â€

At a news conference, Vargas Llosa said the announcement came as â€œa total surprise,â€ andÂ  that he hoped to survive it with only a temporary disruption to his life.

â€œI will keep on writing until the last days of my life. I donâ€™t think the Nobel prizeÂ  will change my writing, my style, my themes,â€ he said.

From â€œThe Time of the Hero,â€ his debut novel in 1962, to more recent works like â€œTheÂ  Feast of the Goat,â€ Vargas Llosa has ranged widely from his native Peru to far off landsÂ  like dictator Rafael Leonidas Trujilloâ€™s Dominican Republic.

The academy hailed â€œhis cartography of structures of power and his trenchant images ofÂ  the individualâ€™s resistance, revolt, and defeat.â€

Vargas Llosa also has plunged headlong into politics, running unsuccessfully forÂ  president of Peru, waging fiery debates first for and then against the Cuban revolution,Â  and writing about wars and conflicts as a literary journalist.

But he acknowledged Thursday that the information revolution is rapidly changing hisÂ  cherished world of words.

While he said change was inevitable, he added, â€œI donâ€™t know if I am happy. My idea ofÂ  the book is (a) paper book.â€

He said he hoped literature would remain connected to the â€œmost essential problems,Â  social, human.â€

â€œI think there is a danger that the technology will impoverish the contents of the book,â€Â  he said.

â€œBut this also depends on us: if we want literature to keep being what it has been, it isÂ  in our hands.â€

Vargas Llosa, who is teaching his philosophy of literature at Princeton University in NewÂ  Jersey this semester, gave a vibrant defense of its continuing relevance.

Good literature is â€œfundamental if we want to live in freedom in the futureâ€ because itÂ  creates citizens who are less easily manipulated by those in power.

â€œNothing awakens the critical spirit in a society as much as good literature. That is whyÂ  the first thing all dictatorial regimes do, not matter what their stripe, is imposeÂ  censorship.â€

â€œAnd itâ€™s true: good literature, by awakening the critical spirit, creates citizens whoÂ  are more difficult to manipulate than in a society without literature and without goodÂ  books.â€