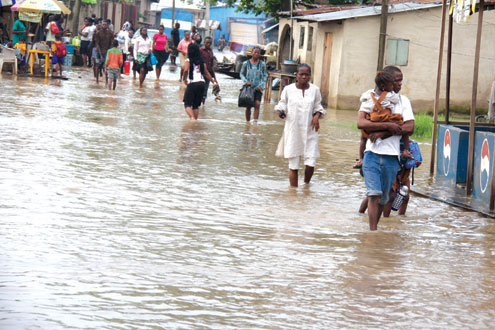 The Lagos State Government of Nigeria has concluded arrangement to evacuate victims ofÂ  the flood disaster at Ajegunle and some communities in Ikosi-Isheri Local CouncilÂ  Development Area of the state.

Thousands had been rendered homeless as a result of the massive flood which wreaked havocÂ  on about nine communities abutting the River Ogun, while some people were feared drowned.

The flooding was caused by the Ogun-Osun River Basin Development Authority thatÂ  releasedÂ  water from the Oyan Dam into the Ogun River, making the river to over-flow its banksÂ  andÂ  causing havoc.

In order to salvage the situation, the Lagos State Government said it had concludedÂ  arrangement to move the victims of the flood to the Lagos State Relief Camp, Agbowa, EpeÂ  area of the state.

The Agbowa Relief Camp can accommodate between 500 and 1, 000 people and has adequateÂ  facilities to cater for displaced people anywhere in the state.

According to Oke-Osanyintolu, the state government had begun enumeration of thoseÂ  displaced by the flood and would move them to the camp anytime from now.

He said so far, at least 681 internally displaced people, including 405 children had beenÂ  enumerated while the people were still beingÂ  enlightenedÂ  about governmentâ€™s plan.

The LASEMA boss stated that the agency was only awaiting the pronouncement from GovernorÂ  Babatunde Fashola, giving the go-ahead to evacuate the victims to the camp.

â€œWe are going to move them to our Agbowa Relief Camp and our commanders are already onÂ  ground there.Â Â  We have enumerated 681 internally displaced people, including 405Â  children.

â€œGovernor Babatunde Fashola and Dr. Tola Kasali, Commissioner for Special Duties haveÂ  taken over the process of evacuation.Â Â  The National Emergency Management Authority, NEMAÂ  has given the state some relief materials.

â€œThe United Nations Children Fund, UNICEF has also waded in and will be giving us someÂ  materials.Â Â  The Director General, NEMA is also going to visit us soon.Â  All plans haveÂ  been concluded.Â Â  We are on top of the situation,â€ said Oke-Osanyintolu.

â€œWe have food to take care of the displaced people.Â Â  We have done it before and we willÂ  do it again.Â  What we are doing now is to create awareness and sensitise the people onÂ  good sanitary habit in order to avert epidemic,â€ he added.

As at the time of filing this report, Fashola was expected to visit the scene of theÂ  flood with some of his commissioners and top government officialsÂ Â  to fast-track theÂ  evacuation of the victims and to share in their pains.