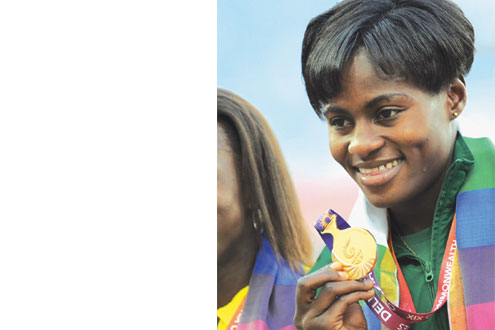 â€¢Osayemi displaying the gold medal she won at the tournament.

Nigeriaâ€™s Osayemi Oludamola has tested positive for Methylexanemine at the CommonwealthÂ  Games and could be stripped of her 100m gold medal.

It was a national embarrassment and disgrace for Nigeria when the Commonwealth Games 100mÂ  winner, tested positive for doping.

â€œAny positive test, whether it is in a high-profile event or not, is something that weÂ  very much regret for a clean games, clean sport and a clean competition,â€ Fennell said,Â  adding that no decision had been made on the medal.

â€œOne doesnâ€™t know what kind of damage will occur as a result of this test but we justÂ  want to let everyone know that we are very vigilant and the testing and laboratoryÂ  analysis are of the highest standards.â€

Fennell said Oludamola has been notified of the adverse finding and has requested theÂ  testing of the â€œBâ€ sample.

â€œThis is something we just have to work with and make sure that we do our part inÂ  monitoring and eliminating doping in sport,â€ Fennell said.

The World Anti-Doping Agency (Wada) recently loosened the classification ofÂ  Methylexanemine for next year to the â€œspecified stimulantâ€ list, which covers drugs thatÂ  are more susceptible to inadvertent use and can carry reduced penalties. Sanctions forÂ  use of the drug can be reduced if athletes can prove they did not intend to enhanceÂ  performance. Penalties can range from a warning to a two-year ban.

Wada said Methylexanemine was sold as a medicine until the early 1970s and has nowÂ  reappeared in some nutritional supplements and cooking oils.

Fennell said Oludamolaâ€™s result was the first positive test of the games.

â€œWe have conducted over 900 tests to date and weâ€™ve had results from just over 700,â€Â  Fennell said. â€œBut unfortunately I have to record and report to you that weâ€™ve had aÂ  positive result.â€

Pearson originally crossed first in the race at the Jawaharlal Nehru Stadium in 11.28Â  seconds. But hours after celebrating her victory, the Australian was disqualified becauseÂ  she had false started in the first attempt to run the race.

Oludamola was then given the gold medal, and Natasha Mayers of St. Vincent and theÂ  Grenadines was moved up to bronze.

If Oludamola is stripped, then Mayers would stand to claim the gold. Katherine EndacottÂ  of England, who crossed fourth in the race but received the bronze medal after theÂ  disqualification, would then be moved up to silver and Bertille Delphine Atangana ofÂ  Cameroon would get bronze.

Oludamola also ran in the semifinals of the 200m on Sunday, but failed to advance afterÂ  finishing fourth in her heat with a time of 23.95 seconds.