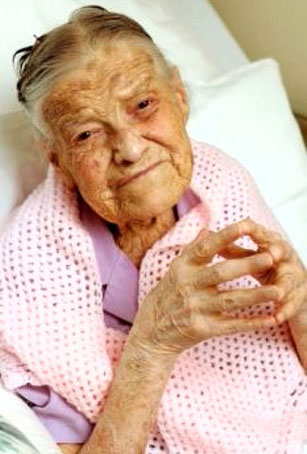 Britainâ€™s oldest virgin has celebrated her 107th birthday – and put her longevity down toÂ  her abstinence.

Proud Clara Meadmore, who once lived in New Zealand, has never had sex because she wasÂ  â€œtoo busyâ€ for intimate relationships which seemed like â€œa lot of hassleâ€.

Her only surviving family are two nieces in New Zealand.

Clara knew she would remain single from the age of 12 and abstained as a young woman toÂ  concentrate on earning a living, she told British newspaper the Daily Mail.

The retired secretary said sex meant marriage during her youth in the 1920s and 1930s -Â  and she wasnâ€™t interested in settling down.

She marked her 107th birthday with a small party with friends at her nursing home inÂ  Cornwall. Clara received a card from the Queen and celebrated with a drop of wine.

She said: â€œPeople have asked whether I am a homosexual and the answer is no. I have justÂ  never been interested in or fancied having sex.

â€œIâ€™ve always had lots of platonic friendships with men but never felt the need to goÂ  further than that or marry.â€