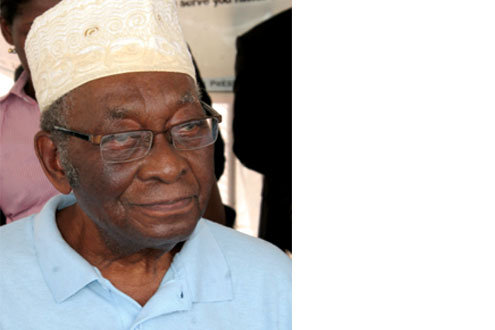 The remains of Nigeriaâ€™s Professor Aliyu Babatunde Fafunwa will be buried today in Lagos.

The former minister of education and a career educationist died in Abuja yesterday. HeÂ  was aged 87.

His death has sparked an outpouring of tributes by Nigerians and political leaders whoÂ  appreciated his contribution to Nigeria, especially on the introduction of the 6-3-3-4Â  progression in the nationâ€™s educational system.

Lagos State Governor, Babatunde Fashola, the Academic Staff Union of Universities, ASUUÂ  and the Nigeria Union of Teachers, NUT have all mourned the former Minister.

Fashola, in a condolence letter to Fafunwaâ€™s widow, Doris in Lagos,Â  said with theÂ  passage of Fafunwa, Nigeria had lost a most committed educationist whose steadfast roleÂ  in the upbringing of many generations of Nigerians spanned several decades.

He said that both as a secondary school and later university teacher, Fafunwa gave a lotÂ  to the education system in the country, a commitment which was acknowledged by hisÂ  elevation to the exalted position of Federal Minister of Education.

â€œHis most impactful years of service to his fatherland witnessed innovative developmentsÂ  like the 6 -3- 3- 4 system of education which sought to rescue the nationâ€™s educationÂ  system then on a downward slide.

â€œEven while out of office, Professor Fafunwa continued to work for the development ofÂ  education in the country through the numerous seminars, workshops and symposia to whichÂ  he was invited to deliver papers across the country.

â€œIt is indeed a glowing testimony to Professor Fafunwaâ€™s commitment to the educationalÂ  sector that he answered the call of his Maker while in Abuja to deliver one of hisÂ  keynote lectures at the Open University in the Federal Capital Territory,â€ he stated.

Also, ASUU President, Professor Ukachukwu Awuzie described the death of Fafunwa as aÂ  great loss to the country, saying that the academic world would miss him.

â€œThis is a great loss to this country. We just discussed how he could speak at anÂ  education summit on the history of Nigeria education: where we got it wrong and whatÂ  could be done to revive it. But he is gone,â€ he lamented.

According to Awuzie, Fafunwa was a father and a great educationist who had done much forÂ  the country but that the government failed to implement his idea.

â€œFafunwaâ€™s design on education in 1992 was a great idea that would have helped thisÂ  country tremendously but it is a pity that we lost a good man of enormous wealth ofÂ  idea,â€ he added.

Reacting, the Nigeria Union of Teachers, NUT, Lagos Wing, described his death as a bigÂ  loss, saying that Fafunwa lived a life worthy of emulation.

Secretary of the union, Comrade Jamiu Idris said â€œFafunwa was an outstanding Nigerian. HeÂ  was an educationist par excellence. Our hope is that the implementers of the countryâ€™sÂ  educational policies look and use his model.â€

He described the former minister as the apostle of the use of indigenous languages forÂ  teaching in the country, adding that â€œThis is a great postulation that the policyÂ  implementer must use perhaps to immortalise this great Nigerian.â€

Idris commended Fafunwa for formulating the 6-3-3-4 educational system, which successiveÂ  governments in the country failed to adequately implement.

â€œThe NUT and teachers will remember him for his love for education and the country. WeÂ  will miss him. He was a father to us all,â€ he said.

The former Minister was about to be buried at his Victoria Island, Lagos home at the timeÂ  of filing this report.