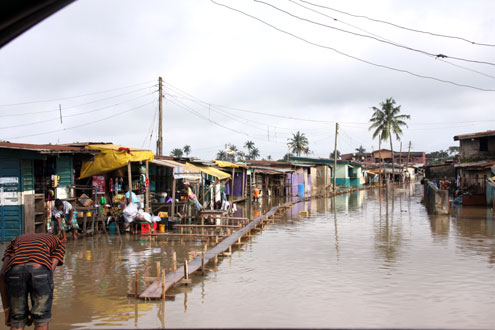 Leaders of Idera Tuntun Community, one of the communities submerged by flood at AjegunleÂ  area of Lagos State, South West Nigeria stunned Governor Babatunde Fashola yesterday byÂ  saying that they are happy about the flood that hit the area.

Baale of the community, Chief Gideon Ogundipe told Fashola that they were not ready toÂ  leave the area, saying that the flood was a normal occurrence and a blessing for themÂ  since they would now be able to catch lots of fishes to be sold to make money.

Ogundipe said the community had no inkling of any casualties or missing person, sayingÂ  that â€œI have been here since 1936, it has always been like that every year and we haveÂ  been living here like that with no problem.

â€œIt has had no adverse effect on us but this yearâ€™s surge is different as it is much.

We are used to this, we are happy with it because we eat from here as our business ofÂ  fishing is booming now. It will only be strange to those who are moving here newly. WhenÂ  you get there, people are living there.â€

However, Fashola who visited the area to assess the damage caused by the flood hintedÂ  that all the communities in that area would be relocated later but that onlyÂ  681internally displaced people would be moved to the relief camp at Agbowa, Epe.

The governor lamented the plight of the people, saying that it is a â€œnational disaster.Â  NEMAâ€™s intervention is coming too late; I have sent letters to them over the last threeÂ  years since I first came here.

â€œThis place is not habitable but people stay here because they want to eke a living butÂ  in doing so, we do not want them to lose their lives. The emergency toll lines are stillÂ  functional, more emergency help lines would be established; helicopterâ€™s surveillanceÂ  would be deployed to carry out the surveillance of the area.â€

Narrating how they had been surviving inside the water, one of the victims, Mr.Â  Kekechukwu Okoroafor told P.M.NEWS that â€œI donâ€™t have rest of mind since this floodÂ  started. I used to put my foam on top of tyre and sleep.Â  Government should help us byÂ  opening the water to flow out.â€

According to Mr. John Okorie, â€œmy foam is soaked with water.Â  I used to sleep on water.Â Â  Government should give us good drainage channel.â€

Miss Okoro who waded through the water reaching her waist, from her house to meet ourÂ  reporter, said: â€œwe put our stove inside water to cook.Â  We urinate and pass our wasteÂ  inside the water.Â  Government should take us away from here.â€

Mr. Olajide Ayejuni, who has eight children, lamented his plight as the water has enteredÂ  his house but continued to live there because he had nowhere to go.

â€œWe have no hope; there is nothing we can do.Â Â  This water is rising every moment.Â Â  WeÂ  pack our bed up and sleep.Â  We will be happy if we are moved away from this area, thisÂ  flood has been occurring yearly; government should please provide a place for us toÂ  sleep,â€ he said.

A female victim who did not want her name mentioned lamented that she uses canoe to takeÂ  her children away from the house to the expressway to school and back every day, addingÂ  that a snake was recently killed in one of the compounds in the area.

According to her, â€œin my compound, when you fetch water, you see tiny snakes there, it isÂ  not funny.Â Â  Basically, I stay upstairs but my neighbours downstairs have moved awayÂ  because the water has destroyed their properties.â€

Mr. Adeogun, who has seven children, had been living in the area for the past 30 years,Â  lamenting that this yearâ€™s flood was the worst. â€œI lift my foam up and sleep.Â  I have noÂ  place to go,â€ he said.

Apostle Samuel Ogundipe said: â€œmy forefathers lived here 200 years ago; we donâ€™t want toÂ  move away from here.Â Â  This water is not our problem; our problem is for government toÂ  combat the flooding.Â  We have canoes that move us to and from this area.â€