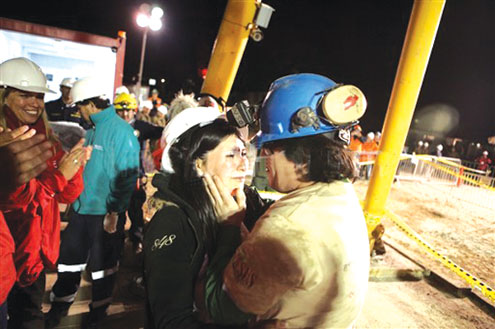 â€¢Chilean miner Osman Araya (R) is welcomed by his wife Angelica as he comes out of the Fenix capsule after being brought to the surface this morning following a 10-week ordeal in the collapsed San Jose mine, near Copiapo, 800 km north of Santiago, Chile. Araya was the sixth from the 33 trapped miners to be lifted from underground. AFP photos.

Sixty-nine days after they were trapped almost 700 metres underground, the 33 ChileanÂ  miners were being rescued this morning one after the other. They are the first humanÂ  beings to have stayed underground that long, that deep, and still come out alive.

Ten miners had been rescued safely at the time of going to press this morning. They wereÂ  trapped on 5 August 2010 after a cave-in at the mine in Northern Chile.

The first miner to be rescued was Mario Sepulveda, who brought a souvenir with him â€” aÂ  bag of rocks. The rocks, which Sepulveda gave out to rescue workers, appeared to beÂ  wrapped in silver tinfoil.

Hundreds of people watching on a TV feed giggled as he brought a touch of humour to aÂ  tense and riveting operation to free him and 32 other men from a collapsed mine inÂ  northern Chile.

Sepulvedaâ€™s whoops of joy were audible from the escape shaft even before he surfaced fromÂ  the mine, a new sign of the remarkable resilience demonstrated by the 33 men since theyÂ  were trapped when the mine caved in.

Throughout their ordeal, the miners appeared to have held together and their spiritsÂ  often seemed high, but psychologists say some will likely suffer from stress long afterÂ  the rescue is complete and they are reunited with their families.

Sepulveda called for deep changes to protect workers rights and appealed to be treatedÂ  like a worker and a miner rather than a celebrity: â€œPlease donâ€™t treat us like artists.â€

When he reached the top, he hugged his wife before ripping open his bag full of rocks andÂ  handing them out with a big smile. He then ran over to a group of friends to hug them andÂ  lead them in yelling out a classic cheer that ended with the line: â€œLong live the ChileanÂ  miners!â€

His mother was so moved that she had trouble speaking, and his brother, Jose Sepulveda,Â  said simply that the homecoming was long overdue.

â€œWe are all happy and content. We are all hugging each other and crying,â€ he said.

The rescue exercise was still ongoing. All the 33 miners are expected to be rescued byÂ  Friday.