Eguavoen Opts For U-23 Job 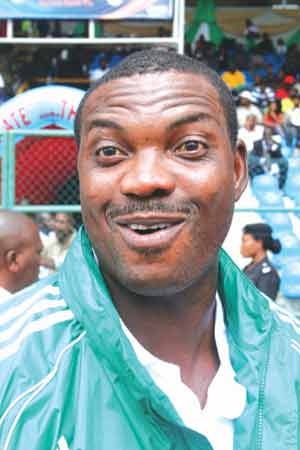 Interim Coach of the Super Eagles, Austin Eguavoen says he will be better off with theÂ  coaching job of U-23 Eagles than handling the senior national team.

Eguavoen whose star-studded team failed to beat the Syil National of Guinea in an AfricanÂ  Cup of Nations qualifier in Conakry last Sunday said his mind is no longer with theÂ  Eagles since the day Nigeria Football Federation, NFF announced the coaching job asÂ  vacant.

Eguavoen made it clear that he has his eyes set on handling the U-23 team in spite ofÂ  having been in charge of the senior team since the contract of Swede coach, LarsÂ  Lagerback, was not extended after the 2010 FIFA World Cup in South Africa.

The former Enyimba gaffer also said he is unperturbed if a new coach is named in place ofÂ  him for the Super Eagles, as he will gladly accept an offer to take charge of the U23Â  team.

â€œLike I said earlier, I am favourably disposed to handling the U-23 side.Â  I have alsoÂ  made it clear that I will not apply for the Super Eaglesâ€™ job because I donâ€™t see anyÂ  sense in doing so. If another coach is appointed to replace me, I will accept that andÂ  will prefer the U-23 side,â€ Eguavoen said on Brila FM early today.

Still angry at the attitude exhibited by the players before and during the Guinea match,Â  Eguavoen made it clear that he believes he has given his best to the Nigerian team underÂ  the circumstance he found himself.

â€œI donâ€™t think it will be fair for anyone to use the loss against Guinea to judge me.Â  Agreed we lost that game but no coach will line up his team in a bid to lose a veryÂ  important game like we did against the Guineans,â€ he said.