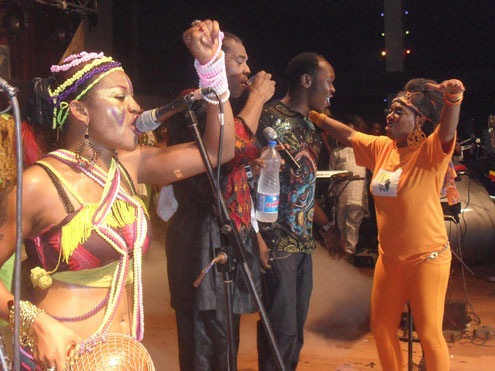 As Felabration 2010 ended this morning, Yeni, Femi and Seun Anikulapo â€“KutiÂ  showed open love for one another at the New Afrika Shrine.

The trio demonstrated open love at the Shrine when Femi was thanking those that supported the family to make the yearly event aÂ  huge success.

Sooki, as Femi is popularly called, invited Yeni and Seun to the stage to show appreciation to the fans and in the process the KutisÂ  demonstrated love.

â€œCongratulations that we are all part of the 2010 Felabration. Seun come and say thank you to our fans, you see we are one family,â€ said Femi as he handed the microphone to Seun.

And in the process they danced together to the admiration of Tunde and Wunmi Obe, Keziah Jones, and others who were on stage with them to express their gratitude to guests and fans that turned up in huge numbers throughout the one-week event.

Last Friday, the internationally acclaimed Makossa King Awilo Logomba showed the stuff he is made of as he took the crowd to cloud nine, dishing out hits from his Makossa archives. Femi later join him on stage and they had a duet.