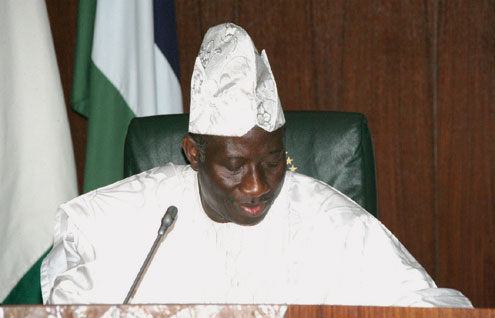 President Goodluck Jonathan has approved the sum of N2.1billion as Federal Government assistance to the governments of Lagos, Ogun and Jigawa states to alleviate the sufferings of victims of flood disasters in the three states.

The three states are to get N700m each, amounting to N2.1billion.

While addressing affected persons in Isheri Olofin Community in Ogun State and Ajegunle Community in Kosofe LGA of Lagos State, respectively, President Jonathan sympathised with them over the loss of their properties and houses, but was thankful to God that no life was lost to the disasters.

He said he was moved by their plight hence he came to see things for himself.

He assured the people of the areas that apart from the cash assistance to complement the efforts of NEMA and the state governments, the Federal Government is assembling a team of experts to undertake a comprehensive study of the recurring floods with a view to finding a permanent solution to them.

He pointed out that the effects of the global warming and its resultant rise in water levels cut across the globe, affecting not only riverine but desert communities, as witnessed in Sokoto and Kebbi states recently.

â€œWe cannot run away from the problem every year. We live in a technological age and our generation must change this situation for the better.â€

â€œWe will work with the state governments to carry out a comprehensive survey of the areas, using geographic information systems and satellite imagery to identify the problem areas and find a permanent solution.â€

President Jonathan, using a chopper, had earlier carried out an aerial inspection of the flood ravaged communities including Ajegunle, Ikorodu, Warewa, River View Estate, Isale Oro and Gateway City Estate, all in Lagos and Ogun states, in the company of the governors of the states.

He also did ground inspection of the Oyan River Dam and the Gateway city in Abeokuta, as well as the Ajegunle community in Lagos before addressing the communities, respectively.

Speaking separately, the Governor of Lagos, Babatunde Fashola, and his Ogun counterpart, Gbenga Daniel, thanked the President for coming to sympathize with the victims, pointing out that the gesture has rekindled hope among the people that their sufferings will be alleviated.

They praised President Jonathan for standing by the flood victims in their time of distress, noting that the Federal presence has comforted them greatly.

The Baale of Ajegunle Community in Lagos State, Mojosola Oladunjoye and his counterpart in Isherin Olofin in Ogun State, Alhaji Abdulahi Tajudeen, also thanked President Jonathan for identifying with the sufferings of their people.

Experts who conducted the President and his entourage around the flood ravaged areas , including the Lagos Commissioner of Environment, said the floods which affected no less than 1, 500 homes in Ajegunle alone, have re occurred annually since 2007, leading to the loss of properties, farmlands and infrastructure including houses and schools.

They attributed the floods largely to the effects of global warming and its attendant rise in water levels, as well as intense and prolonged rainfalls this year, resulting to overflows from the Ogun River and surrounding tributaries.