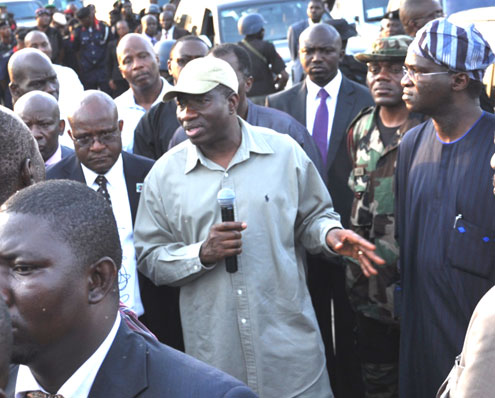 Rresident Goodluck Jonathan is certainly a man of luck. The luck that saw him becomeÂ  governor, vice president and president of Nigeria has not yet deserted him. With theÂ  scenario that occurred on Wednesday when the president paid a visit to theÂ  flood-ravaged communities at Ajegunle area of Lagos State, southwest Nigeria, luckÂ  may come his way next year when he seeks to retain his presidential seat.

On learning that the president would be visiting the Ajegunle flood victims,Â  thousands of Lagosians who had never seen the president trooped to the Lagos-IkoroduÂ  Expressway, standing on both sides of the highway to catch a glimpse of theirÂ  president.

Both sides of the highway, from Ketu to Ajegunle, were jammed-packed with peopleÂ  including market women, school children and area boys, among others. After theÂ  event, as the presidentâ€™s convoy moved by, thousands of Lagosians on both sides ofÂ  the road waved to him.

Jonathan would certainly be surprised with what he saw from Ajegunle to Ketu, withÂ  the sea ofÂ  heads rejoicing that their president identified with a flood-ravagedÂ  community. The crowd was not rented, like most politicians do at their rallies.

As the convoy drove by, area boys on motorcycles followed it, entertaining theÂ  crowd, and riding their bikes dangerously. It was a day the president would notÂ  forget soon. The enthusiastic crowd showed that he has large army of admirers inÂ  Lagos State, which may help his political ambition.

Five hours to the presidentâ€™s visit, traffic was light on the Ikorodu-Mile 12Â  axisÂ  of the Lagos-Ikorodu Expressway, while security was tight.Â  Police anti-bombÂ  vehicles were on ground to avert a recurrence of the 1 October, 2010 Abuja bombing.Â  Abandoned vehicles around the area were towed away. Hundreds of policemen, civilÂ  defence corps, men of the Federal Road Safety Commission, FRSC, and others were onÂ  ground to ensure smooth traffic flow.

At about 5:30 p.m. the president arrived.Â  Pressmen were not allowed near him but heÂ  used a public address system while making his speech.

In his address, Lagos State Governor, Babatunde Raji Fashola told the president theÂ  danger residents in the area faced as a result of the perennial flood and howÂ  several people have been displaced. He thenÂ  asked the Commissioner for theÂ  Environment, Dr. Muiz Banire, to brief the president on the findings of experts whoÂ  surveyed the area.

Banire said the victims might have to be relocated for government to engage inÂ  serious work in the area, adding that government had written three separate lettersÂ  to the Federal Ministry of the Environment on the dangers facing the residents.

He stated that about 1,000 people had been rehabilitated at the Agbowa Relief Camp,Â  while some still chose to remain in the area trying to eke out a living, adding thatÂ  â€œmany have lost farmlands and properties to the disaster.â€

Banire explained that studies undertaken by the state government had shown thatÂ  dredging may be one of the solutions to employ to solve the perennial flooding inÂ  the area.

According to him, the low casualty figure in the disaster was due to the earlyÂ  warning from the state government to sensitize residents to prepare for high tideÂ  this year between September and October.

He stated that the flooding had been a re-occurring one, stressing that the floodÂ  that occurred some weeks ago was the worst so far as several people were sacked fromÂ  their homes and their businesses.

Spokesperson of the communities, the Baale of Odogun, Chief Olutayo Ibrahim, saidÂ  his people were not ready to leave the area as they had been there for a long time,Â  adding that they wanted to remain on their forefathers’ land.

Hundreds of residents hailed their leader for his bravely in telling the presidentÂ  that they do not want to be moved from their fatherland, where they had lived forÂ  centuries.

According to Ibrahim, â€œI am now 67 years old. My forefathers were born here. WeÂ  donâ€™t have problem with the water.â€ He added that what they wanted the president toÂ  do was to scale up infrastructure development in the area. He called on theÂ  government to assist in improving the decayed infrastructure in the area and alsoÂ  raise the level of Ikorodu road to stem the flood.

He also wants the government to find ways of controlling traffic in the area andÂ  suggested that the dam should have been opened in February rather than SeptemberÂ  when water level would be high, adding that â€œwe want to remain here.â€

The president commiserated with the victims of the flood and assured that theÂ  Federal Government would find urgent solution to the flood problem in the area, butÂ  added that the people must be willing to discard the fables of their forefathers andÂ  move out of the area.

â€œMy purpose of coming is to listen to you and commiserate with you and those of youÂ  who have lost your properties. Just like the Environment Commissioner noted, everyÂ  September and October, you experience high water level and its normal, but thisÂ  yearâ€™s own is more than it used to be.

Jonathan added that â€œto address your present condition, the Federal Government isÂ  going to work with the Lagos State Government to see what can be done in thatÂ  regard. As for the immediate problem, the Federal Government is going to send aÂ  little assistance through the Lagos State Government, and as you know, NEMA has alsoÂ  been directed to send relief materials to you; but aside that, we would also sendÂ  something special this time around in terms of cash forÂ  some of you who need to beÂ  assisted.

â€œWe would work with those in charge to see how we can manage the situation. But theÂ  most important thing is that Fashola has been briefing me before we came and what heÂ  is suggesting is a long term plan. We cannot tell you that our system is to evacuateÂ  you every year, the world is changing and we can no longer live in those times.â€

The president countered the decision of some residents in the area not to leave,Â  saying that â€œwhen I was small in my village, every year, we move out because waterÂ  would cover the road, and we would move to the centre, but that has stopped. WeÂ  cannot continue like that, and because of technology, that has stopped.

â€œSo, we must find a way to solve the problem. We cannot continue to say that if ourÂ  forefathers were moving every year, then we must continue to move our children andÂ  families every year. This is a generation that must change things.

â€œSo, we would work with the state government to make sure that things are changed soÂ  that this issue of moving people out every year to a friendâ€™s place which might notÂ  be decent enough is stopped. The federal and state governments would work hand inÂ  hand to look into it.â€

The president also visited some communities ravaged by the flood in Ogun State andÂ  promised that pro-active measures would be adopted to avert future occurrence.

Some communities in Lagos and Ogun States were sacked by flood as a result of theÂ  rise in water level occasioned by the release of water from the Oyan Dam into theÂ  Ogun River by the Ogun-Osun River Basin Authority about three weeks ago.