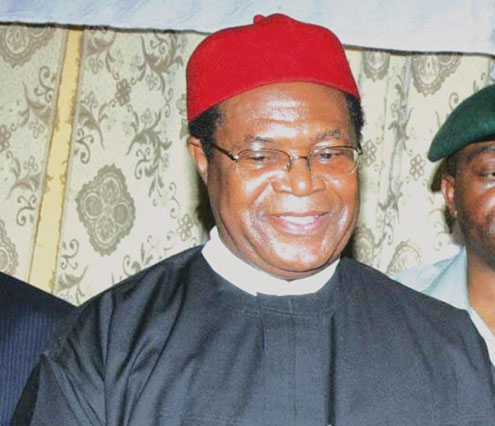 The Peoples Democratic Party [PDP] National Chairman, Dr. Okwesilieze Nwodo has been disowned by his Ukehe traditional rulersâ€™ council and politicians, saying that the embattled national chairman is on his own following the dissolution of the Executive of the party in Enugu State.

The royal fathers led by the Chairman Igbo-Etiti Traditional Rulers Council, His Royal Highness, Igwe Francis Oti and Hon. Eugene Odoh Speaker Enugu State House of Assembly made their stand on the matter known when they paid a solidarity visit to the State Governor, Mr. Sullivan Chime at the Government House, Enugu.

The visitors said Nwodo and his brothers are on their own. “We did not send them and they are not speaking for us,” they said.

The royal fathers, who were accompanied by the Speaker of the State House of Assembly, Chief Eugene Odo, described the plans of the former Chairman of Centenary Committee and National Chairman of PDP â€“John Nnia Nwodo, and Okwesilieze Nwodo to destabilise the party and Enugu State as unfortunate and unacceptable.

They recalled that Governor Chime in an effort to carry the people along helped to secure waiver for Nwodo to become the National Chairman of PDP and also appointed his brother Chairman of Enugu Centenary Committee and wondered why they should pay the Governor back by undermining him and the government of Enugu State.

Responding, Governor Chime thanked the royal fathers for their kind words and solidarity support to his administration and assured that a team of water engineers would be sent to inspect their water scheme for possible reactivation.

He noted with satisfaction, the harmonious working relationship between the Executive and the Legislative arms of government in the state, which was made possible by the Speaker of the House, Chief Eugene Odo whom he described as a good ally of government.

According to Governor Chime, the past four years of his administration in the state were very peaceful.

â€œChief Odo is a true son of Ukehe. I do not have problem with the Speaker, he is a strong ally of government, and we will continue to work with him,â€ Chime said.

He decried the statement credited to the National Chairman of PDP about the party in the state, saying â€œas our brothers who are trying to put confusion in what we are doing, we have handed everything over to God.â€

According to him, â€œin PDP Enugu State, we allowed everybody to belong and participate as members but he came in and wanted to push others out.â€