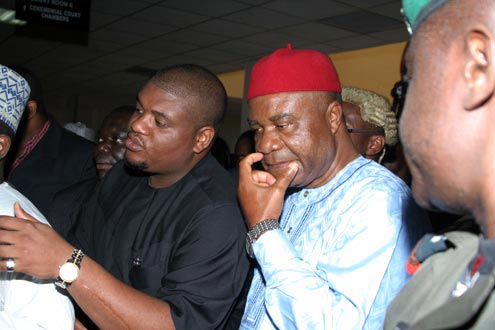 The EFCC slammed the N2.3 billion charge against Ogbulafor while he was the nationalÂ  chairman of PDP.

No reason was given for the judge’s absence on Tuesday’s proceedings as the courtÂ  was besieged by members of the public, journalists and lawyers waiting for the caseÂ  to commence.

It would be recalled that Bello had also ruled that Ogbulafor had a case to answerÂ  after his lawyer, Mr Amaechi Nwaiwu (SAN), asked the court to quash the chargesÂ  preferred against him by the ICPC.

Ogbulafor had asked the court to quash the charges on the grounds that there was noÂ  evidence linking him to the alleged offence.

But Bello held that after analysing the proof of evidence before him that he was ofÂ  the opinion that the prosecution made sufficient evidence to establish a prima facieÂ  case against him.

Ogbulafor was in June arraigned by the ICPC on an amended 17-count charge alongsideÂ  Emeka Ebilah and Jude Nwokoro.

They were alleged to have awarded contracts worth N2.3 billion to some fictitiousÂ  companies and verifying same as purportedly executed on behalf of the FederalÂ  Republic of Nigeria in 2001.

Nwaiwu in an interview told NAN that the case had been fixed for Dec. 6 for hearing

“We were called by the court clerk and asked to pick a new date as My Lord will notÂ  be available,” he said.